I got this year's BBM 2nd Version set in the mail from Rob Fitts the other day.

This year's set has broken away from that somewhat. There's no 1st Version update subset, so the set stands on its own. The set contains 252 cards. There are 180 player cards, which breaks down to 15 per team. As usual, BBM has gotten some really good pictures for the cards. Here's a sampling: 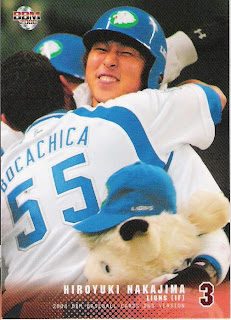 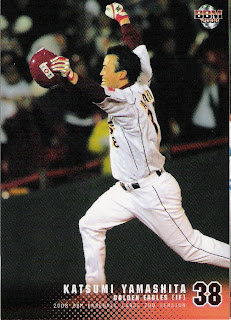 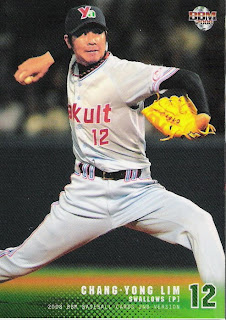 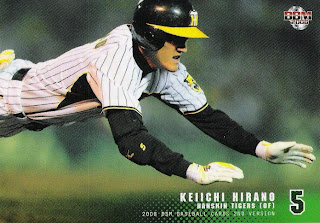 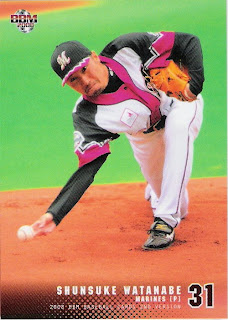 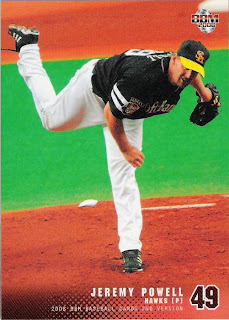 The set also features the usual team checklists with the usual silly pictures: 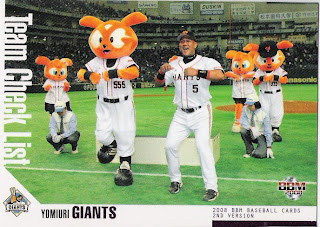 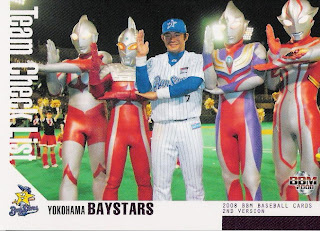 There are four 12 card subsets (1 player from each team) - Title Wars (stars), Breaking Now (breakout players), Pick Up Rookies (self explanatory), and Power Of Veteran (older players). Not everyone appearing in the subsets has a card in the regular player cards - Kimiyasu Kudoh in the Power Of Veteran's set for example. 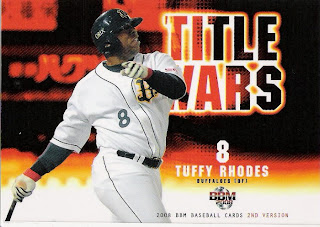 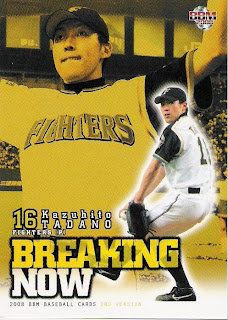 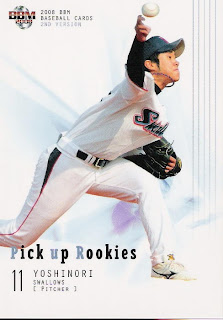 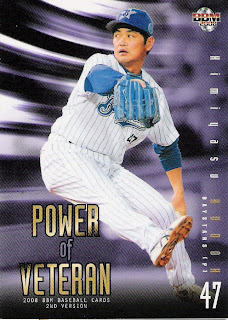 One of the subsets that has been a constant for the 2nd Version set since 2004 has been the First Pitch subset which shows retired players and celebrities throwing out the first pitch at games. While this mercifully didn't get commemorated, the subset does include a collection of sumo wrestlers, models, musicians and golfers, among others. Because of this subset, a gold winning Olympian does appear in the BBM set: 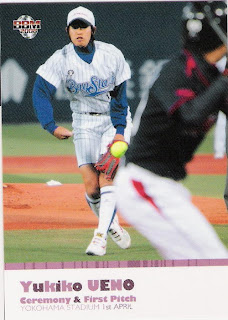 For the most part, I like the set. The biggest issue I have is that the player selection was kind of odd. I'm not sure why if you've only got 15 players per team you'd have cards of Kazuhiro Kiyohara or Sho Nakata, neither of whom had appeared in a ichigun game as of when the cards went to press. The other issue is that some of the players have pictures that are very similar to their 1st Version cards. Even the Swallows team checklist shows the Swallows mascot, just like the 1st Version checklist does. But these are minor quibbles.
Posted by NPB Card Guy at 9:15 PM

That's Toshihisa Nishi on the Yokohama Baystars checklist card, not Takuro Ishii.
And Yuya Hasegawa, not Uyua.. I know it's a typo.

The 2nd Version is always a little interesting to see because of which players ended up having big years that nobody expected (ie, Tomoya Inzen, who was a taxi squad player when 1st Version went to press I think). Keizo and Muranaka not being in 1st Version is pretty stupid in all honesty, same for Kamei and Sakamoto in a way, but whatever.

I don't really know exactly what I'll do about 2nd version though. Most likely, I'll worry about it after the season. 1st Version starts to sell out around now usually, we'll see if it does. I should probably stop buying packs but I really enjoy opening them, it's always been a problem :)