Card Of The Week February 8

I read an article about the late Kazuhiro Yamauchi in the Daily Yomiuri that mentioned that he was the first player to reach 300 home runs in Japan. Obviously that means at some point he must have been the career home run leader. A Noboro Aota Fan's Notes had a post recently that had the "progressive" career leaders in home runs and sure enough, Yamauchi was the career home run leader at the end of the 1964 season with 293. At some point during 1965, he was overtaken by Katsuya Nomura, so his reign lasted less than two years.

Here's another card of Yamauchi, from the 1964 Marukami menko set: 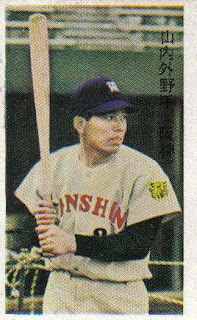