I had previously mentioned that Topps was publishing a 55 card boxed World Baseball Classic set. The set came out last Friday and it's a little better than I expected. There are actually seven Japanese players in the set - Shinnosuke Abe, Yu Darvish, Kosuke Fukudome, Akinori Iwamura, Kenji Johjima, Daisuke Matsuzaka and Ichiro. Maybe not the seven I would have picked, but not bad for a set that was put together before the tournament even started. If Topps does the same thing Upper Deck did and has some insert sets later this year showing action from the actual tournament, I'd expect to at least see cards of Hisashi Iwakuma and maybe Suichi Murata. 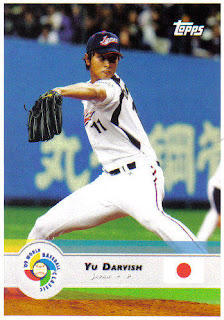 The Japanese team has the second most players in the set behind only the US which has eight. The player selection is kind of odd - would you believe that Miguel Cabrera is the only Venezuelan player in the set? And there are as many Italian players as Puerto Rican players (4)? And there's a card of one player who didn't play (Alex Rodriguez which is understandable)? I'd link to a checklist, but Topps still hasn't bothered to put one on their website. 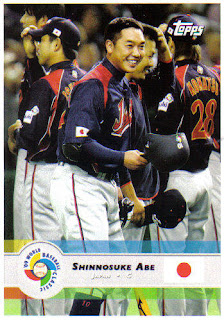 Topps has, however, released a list of "Redemption" cards for the WBC which includes cards of Daisuke Matsuzaka and Yu Darvish. To get these, you need to get an insert card, then go to their website and redeem the card. I'll see what I can find on Ebay...
Posted by NPB Card Guy at 8:25 PM