Deanna Rubin suggested in a comment to my last post that I scan the back of the "Ando" card and see if there's any more information to be found. So here it is: 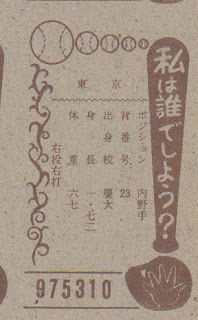 Here's what I think this says: the kanji across the top identifies the team (Tokyo Orions). Starting from the left, the columns indicate that he bats and throws right, his weight and height (don't know the values), his school (Keio University?), his uniform number (23) and his position (infielder). The number on the bottom is the "menko number" and doesn't really mean anything. The text in the bat says "Who am I?" and the hand is the "paper" symbol for the "rock/paper/scissors" game. These last two items are games that kids could play with the menko cards. (I used information in John Gall and Gary Engel's book "Sayonara Home Run" to try to decode the back of the card.)

The two candidates I had before, Kazuhiro Ishiguro and Kazuyoshi Nishiyama, were both right handed. Ishiguro attended Keio while Nishiyama attended Kansai University. So right now it's looking like Ishiguro may be the guy, assuming I've deciphered everything correctly.
Posted by NPB Card Guy at 8:49 PM