One of the comments someone left on the Roberto Barbon post the other day mentioned a really cool website devoted to Cuban baseball - including a section not just cards for Cuban baseball, but cards of Cuban players playing elsewhere in the world, including Japan. The players whose cards are displayed on the page include Barbon, Roman Mejias, Orestes Destrade, Ozzie Canseco and Eduardo Perez.

One of the players who was not listed (perhaps because the page has not been updated in a while) was the greatest Cuban player of the 1980's and 1990's - Omar Linares. In 2002, the Cuban government allowed a couple of players to play in Japan. Linares was the only one to play in NPB - the others played in the industrial leagues. Linares played for the Dragons from mid 2002 through the 2004 season. His final appearance for Chunichi was in the 2004 Nippon Series. He did not play particularly well in Japan, but he was in his mid to late 30's and was slowed by injuries. (Although I must add - he kicked butt in the 04 Series - hitting .389 with 3 doubles and 2 home runs - I suspect he received strong consideration for the "Fighting Spirit" award won by Kazuki Inoue.)

Linares did not have many baseball cards in Japan. As far as I can tell, there are no cards of him from 2002 at all, and the only 2003 card I've seen of him is from an oddball deck of cards that doubles as a Dragons team set put out by Chunichi Sports celebrating their 50th Anniversary. He has four 2004 cards - BBM 2nd Version #683, BBM Dragons #D53, BBM Dragons Central League Champs #C27 and BBM Nippon Series #52. He does not appear to have any Calbee cards at all.

Here's the only two Japanese cards I own of Linares - the 2003 Chunichi Sports card and the 2004 BBM Nippon Series card: 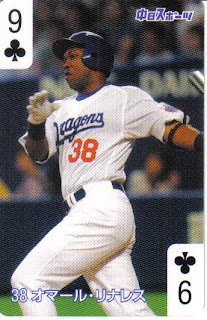 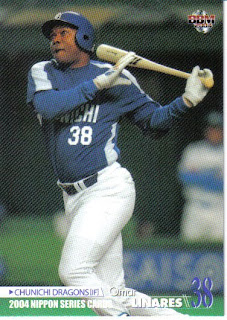 I do have a couple of other cards of Linares. There was some sort of "World All Star Game" played in Fulton-County Stadium in Atlanta in 1990. A 52 card set commemorating the game was produced - if I recall correctly, it was originally sold through ads in hobby magazines for some ridiculous price - maybe $25. I got mine on eBay 10 years later for peanuts. Other than the Cuban players (Linares, Orestes Kindelan, Antonio Pacheco and Lazaro Valle), the biggest name in the set is probably Rikkert Faneyte from The Netherlands. (Japan's Ken Suzuki is the other Ken Suzuki - the one who pitched for the Carp in 1993 and 1995). Linares actually has two cards in the set - his "regular" card (#4) and a game highlight card (#43): 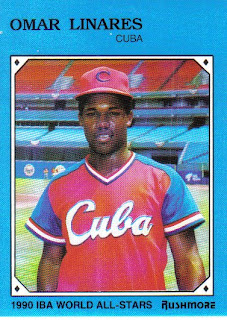 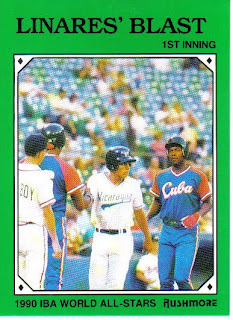 In 1994, a Canadian company put out a 132 card set of players from Cuba - I'm not positive but I think it was from some sort of "super league" rather than the normal Serie Nacional - there are only four teams represented and they are the Centrales, Habana, Occidentales and Orientales. Linares of course had a card in the set (#8): 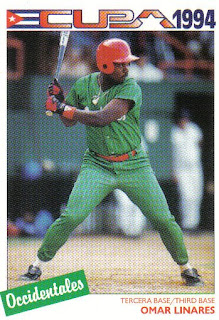 On a personal note, I got to see Linares play against the Orioles when the Cuban National team came to Baltimore in June of 1999. Now, I'm not positive, but I think this is a picture of him batting (I was in the right field corner, and it was 11 years ago, so I can't say for sure it's him): 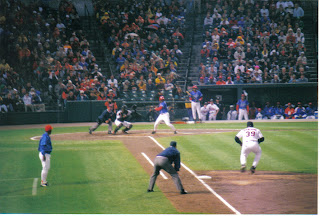