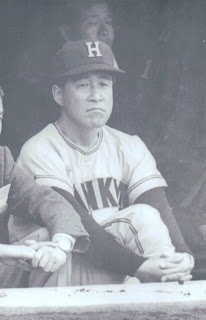 Hi, regarding the postcards by Mel Bailey: he did produce postcards of Japanese players during that period, though he also reproduced many of them in the 1990s for collectors. I'd have to dig through my notes to tell you for sure, but the original ones are printed on Mitsubishi paper (and perhaps another Japanese brand), with a 60s style design and have an aged look. I think the newer ones are on Kodak, noticably modern in design and age in any event. ~Ralph Pearce, collector

Mine all have "Kodak" backs so I guess they're from the 90's.