I'm going to do away with the box around the set summary because it didn't seem to work right with different browsers.  You may have noticed this before I did :-)

For the first time, there are no gaps in the card numbering to account for the hologram inserts.

The Nostalgic Stars subset featured 10 foreign players from the 1950's to the 1990's - Gene Bacque, Chico Barbon, Don Blasingame, Warren Cromartie, Leon Lee, Leron Lee, John Sipin, Daryl Spencer, Joe Stanka and Boomer Wells.  Wells is an interesting inclusion considering that he appeared in both the 1991 and 1992 BBM sets - he's the only one of the 40 players featured in the Nostaglic Stars subsets from 1991 through 1994 whose career ended after BBM started making sets.

For the first time, the Combination Cards included pairings of players from different teams.  Like the 1992 edition, each card had its own title - Hama Heroes, Swallows Swingers, Fighting Fighters, Former Teammates, etc.

For the 1994 season, the Swallows changed their hat logo from the monochrome "YS" insignia they had used since they changed their name from the Yakult Atoms for the 1974 season to the two-tone insignia that they continue to use today.  They also made a slight uniform change, removing a red cuff at the end of the jersey sleeve.  BBM used this as the excuse to replace the Swallows cards 1-42 with a "Late Series" edition (Cards 567-608) showing the players all wearing the new cap and uniform.


UPDATE:  Each box contained two pieces of paper - a little poster and a sheet with set information (including a checklist).  The poster is narrow but long, too long actually to fit in my scanner.  Here's the front and back of the set information sheet: 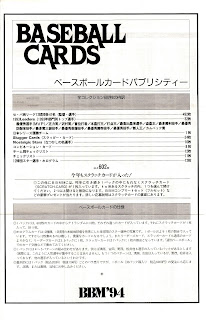 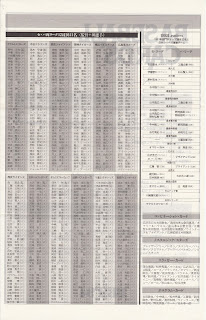 I took a picture of the poster:

I just discovered something truly astonishing with regard to BBM's logo. Every instance of the BBM logo I find is only with a date attached, and ONLY on the actual products. Nowhere on the website for SportsClick or Baseball Magazine Sha can I find a single instance where they actually use their own logo. Every instance of "BBM" is just in whatever type face happens to be in use for a given block of print.

I don't think I've ever seen a company so completely ignore its own brand logo like that. OpenChecklist is coming back online, and in the section for Manufacturer/Brand, they have the option to upload a logo. And I couldn't find one anywhere for BBM!

I hadn't noticed that before but you're right - the logo always has a year with it.

It's neat to see how much better the cards have gotten over time. The 2011 cards look so much nicer than 1994.

I agree, although part of the problem with this batch of 1994 cards is I'm having problems with the scanner I'm using cutting off the sides of the images, so I've been putting the cards up to other items in the scanner to trick it into scanning a larger area. For these, I used a small ruler which kept the cards from being pushed flat against the glass (the cards have a curl) by the lid. As a result, these scans really sucked, especially the hologram.