As you might expect, with Yu Darvish's decision to be posted last week there has been a veritable cornucopia of Darvish cards put up on eBay.  Among the usual BBM and Calbee suspects, I saw this card being offered a lot: 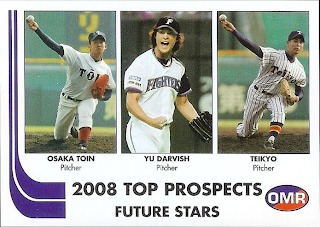 I'm probably stating the obvious here, but this quasi-1982 Topps card is not a legitimate issue but someone's home-brew card.  I especially like the addition of the other two pitchers to make it seem like this is a real "Top Prospect" card.  Not that the other two "prospects" have actual names, just the names of their teams - I'm guessing high school.  (Maybe I'm wrong and it's normal to have the player's name on the FRONT of the uniform.)  I'd be interested in what the back of the card looks like - although not interested enough to actually waste money on one.
Posted by NPB Card Guy at 8:21 AM