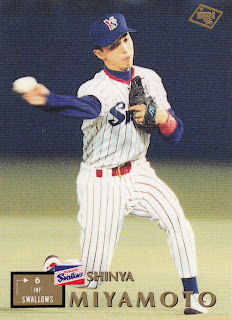 So who was the first round pick in the 1995 draft for the Swallows?  A pitcher named Tetsuya Kitagawa, who was drafted out of the industrial leagues (Nissan Motors), appeared in 36 games with Yakult between 1995 and 1998 and then returned to the industrial leagues.
Posted by NPB Card Guy at 11:04 PM