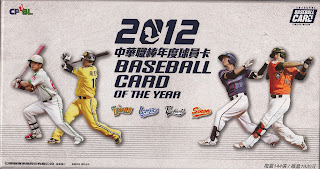 I'm sure Jason's going to be writing about this set soon, but I figured that I'd scoop him a bit.  I picked up this Taiwanese set on eBay recently.  It's called the "2012 Baseball Card Of The Year" set and it appears to be produced by the CPBL itself.  I originally thought that this was a set that had just come out a few months and covering the 2012 CPBL season.  It turns out that I was off by a year - the set came out in early 2012 and covers the 2011 CPBL season.

The set comes in a very nice box.  The box I got was opened but my impression was that it was a complete base set.  I'm not positive that it is, however.  I got 153 cards but the checklist inside the box lid lists team cards for cards 154-157.  I don't know if they are considered part of the base set or not.  There are all sorts of insert cards available - not sure how many are normally included with the set.

The 153 cards that I did get are all player (and manager) cards for the four surviving teams in the CPBL.  At least in the base set, there are no cards for statistical leaders, award winners or record breakers.  Unlike BBM's "flagship" sets in Japan, there is a different number of cards for each team - 37 for the Brother Elephants, 43 for the Lamigo Monkeys, 31 for the Sinon Bulls and 42 for the Uni-President Lions.  For the most part the photos are game action shots although I did notice a couple cards featuring the player in a training situation rather than a game.  There are a number of Westerners included in the set - John Halama, Ryan Glynn, Adrian Burnside, Bryan Corey and Daniel Reichert were the most recognizable names.  It looks like all the Westerners are pitchers.


I guess I was vaguely disappointed with the set.  The card design's a little busier than I like.  I don't know much about the Taiwanese league so I was not pleased that there were no cards that gave some hints about who the better players are.   I think if I had it to do over again, I'd probably not pick up the set.

UPDATE:  At Jason's request, here's a scan of the back of a random card - Chin-Chih Huang of the Lamigo Monkeys (#044): 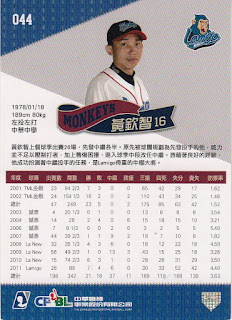 I got this set added to the SCF system last year, and since it was all in English (on the front), I wasn't planning to do a translation post. I don't really understand why they packaged that as a "set". The base set is actually 207 cards, with cards 155-207 being comprised of subsets of All Stars, award winners and records set during the 2011 season. Since 2009, the cards have all been posted to the official CPBL blog.

Can you add a scan of the back of one of the cards? Given that it is technically not the complete 2012 set, I'm wondering if the "Limited Edition" notation on the box means it is different from the pack-issued cards or if that is just marketing rhetoric.

The CPBL's blog has a couple posts dedicated to this version of the set - here and here. It does look like this is slightly different issue than the pack based cards.

Here is the album for this set from the other site that I've been working from:

I know this is a year later, but I have noticed that some Japanese card sets have the regular base cards at the beginning of the set, and all the inserts are just really SPs at the end of the set. A full set might be #1-108, but the "regular" set is #1-63. CPBL may be copying that template.

BBM and the other manufacturers don't do SPs, but the box set concept with a full "base set" plus a handful of "inserts" is alive and strong here.