I decided to take in the Japanese Baseball Hall Of Fame when it opened at 10 on the morning of my first full day in Tokyo.  I was a little concerned that I wouldn't have enough time to go through it before the first WBC game that day (at noon).  It turned out that I was needlessly worried.

The Hall Of Fame is located on the outside of the Tokyo Dome, between Gate 21 and the To-Do Baseball Shop (where I bought a Chunichi Dragons hat).

Admission is extremely cheap - only 500 yen.  And you can actually save 100 yen by using a coupon from the museum's web site.

I walked in and paid my fee and was rewarded with a small guide for the museum and a postcard featuring the latest inductees to the Hall Of Fame: 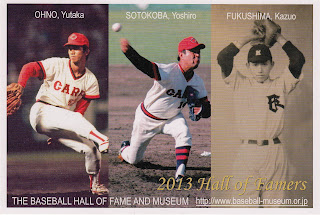 The Hall Of Fame is actually located beneath the entrance area, so I went downstairs and saw at the foot of the stairs a small display on the 2013 WBC: 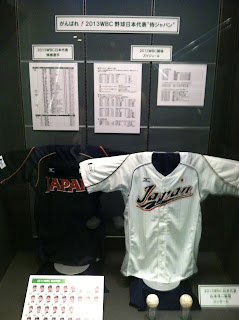 I went to the left into the exhibition area for professional baseball.  This area is split into two rooms.  The first room has "lockers" made up for each of the 12 teams in NBP.  Each locker contains a uniform and hat along with bats, gloves, shoes and other items for players for those teams:

The second room had more historical stuff.  There were displays in the center of the room dedicated to specific players:


I want to stress that these were the only four players who had displays in this section.  I don't know if they rotate memorabilia from different players through these or if they always just have these four players (a book I have from 1999 that shows pictures from the Hall Of Fame shows these four players' displays as well so maybe they always have them out).  Perhaps it's because they are the all time home run leader (Oh), stolen base leader (Fukumoto), consecutive games played leader (Kinugasa) and victory leader (Kaneda).

The rest of the room had other displays on the wall.  Not being able to read Japanese was a major drawback here.  I'm not quite sure what this display was for: 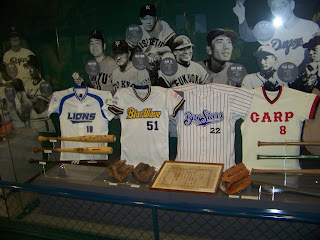 On the other hand, I didn't need to understand Japanese to know what this was:

The next section in the museum was dedicated to the "history of baseball".  Honestly, I don't really remember much from this room.  I don't think I took any pictures.  Again, there were a lot of displays in Japanese that I couldn't read.  But it was in either the previous room or this one that I found a display of baseball cards:


There was also a display case showing American cards of Japanese players.  I was very disappointed to not see any Calbee or BBM cards displayed anywhere.

The next section was dedicated to amateur baseball.  Lots of high school and college stuff.  I was surprised to see this there:

I go all the way to Tokyo and see trophies that were originally awarded about five miles from my house.

There was also a display on the Olympic teams (including the teams made of professionals): 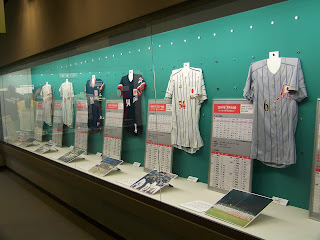 The final room of the "permanent exhibits" was the actual Hall Of Fame - the room containing all the plaques of players.  For some reason, I didn't take a picture of the entire room (probably because of my jet lag), but I took lots of pictures of individual plaques.  Here's a couple:


When I came out of the room with the plaques, I was back where I started at the foot of the stairs.  When I had come down the stairs originally I had gone to my left.  I now went to the right.  There was a small area with a wall frieze and a video display (don't remember what it was showing) and several sections of seats.  I assume that these are seats from different ballparks but I don't know which ones: 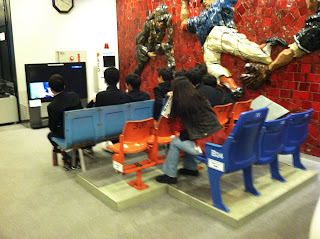 A little further along was an area where you could swing a bat against an NBP pitcher.  There was a group of high school kids in the museum and they pretty much were monopolizing it: 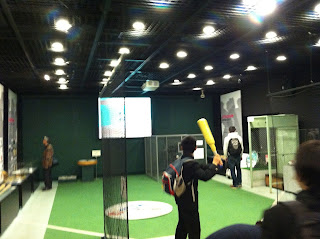 I think the machine was throwing wiffle balls.  I don't think they'd have displays set up on either side otherwise.  I think the displays had something to do with stadiums but I didn't get a good look.

The final room in the museum was a special exhibit dedicated to the World Baseball Classic.  It had a lot of memorabilia from the 2006 and 2009 tournaments, including the trophies: 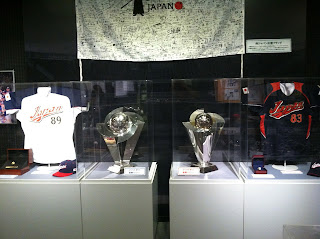 There was also a small display of autographed baseball cards (all US cards of non-Japanese players): 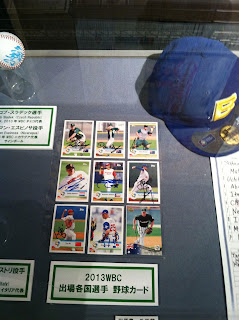 There's also a small library at the Hall Of Fame.  Ralph Pearce had suggested that I ask for a particular person that he knew who worked there, but the museum was busy enough that I didn't really want to try.  I was thinking that I might make it back there later in the trip but it didn't happen.

I was kind of surprised at how small the museum was.  I probably didn't spend any more than about 20 minutes there.  I was severely jet lagged so I had limited patience to try to figure anything out much.  I'd hoped to come back again later in the trip and give it another try but time ran out.

I was also surprised that there really wasn't a museum shop.  There were a couple items in display cases upstairs in the entrance hall that you could buy if the person running admissions wasn't busy.  I think everything they had to offer is on this web page.

To summarize - I think the Hall Of Fame is worth taking a look at if you're going to Tokyo anyway, but unlike Cooperstown it's not a place that's worth going way out of your way for.    It's a great way to kill an hour before a game at the Tokyo Dome.
Posted by NPB Card Guy at 9:45 PM

Nice post. I have been curious about going to the Japanese Hall of Fame for a while and I`m a bit disappointed (though somehow not surprised) to hear that it only takes about 20 minutes to go through. I`ve been to Cooperstown a couple of times and, perhaps more than the Hall of Fame itself, the main attraction there is the beautiful town and all those neat shops selling cards and memerobelia. Sadly the Japanese cityscapes just aren`t capable of providing that type of atmosphere.

I was pretty jetlagged and impatient when I was there and there was a bit of a crowd. Given a little more sleep and a smaller crowd of people, I could see spending an hour or so there. But it's certainly not as extensive as the museum in Cooperstown and the location is not as idyllic.

The mythology of baseball in America is wrapped up (like many other things) in an image of small towns so in many ways Cooperstown in a perfect place for the Hall Of Fame. I don't know if Japan wraps baseball in the same kind of mythology.

Thanks for the recommendation. Visiting the Japanese Baseball Hall of Fame is now on my to-do list.