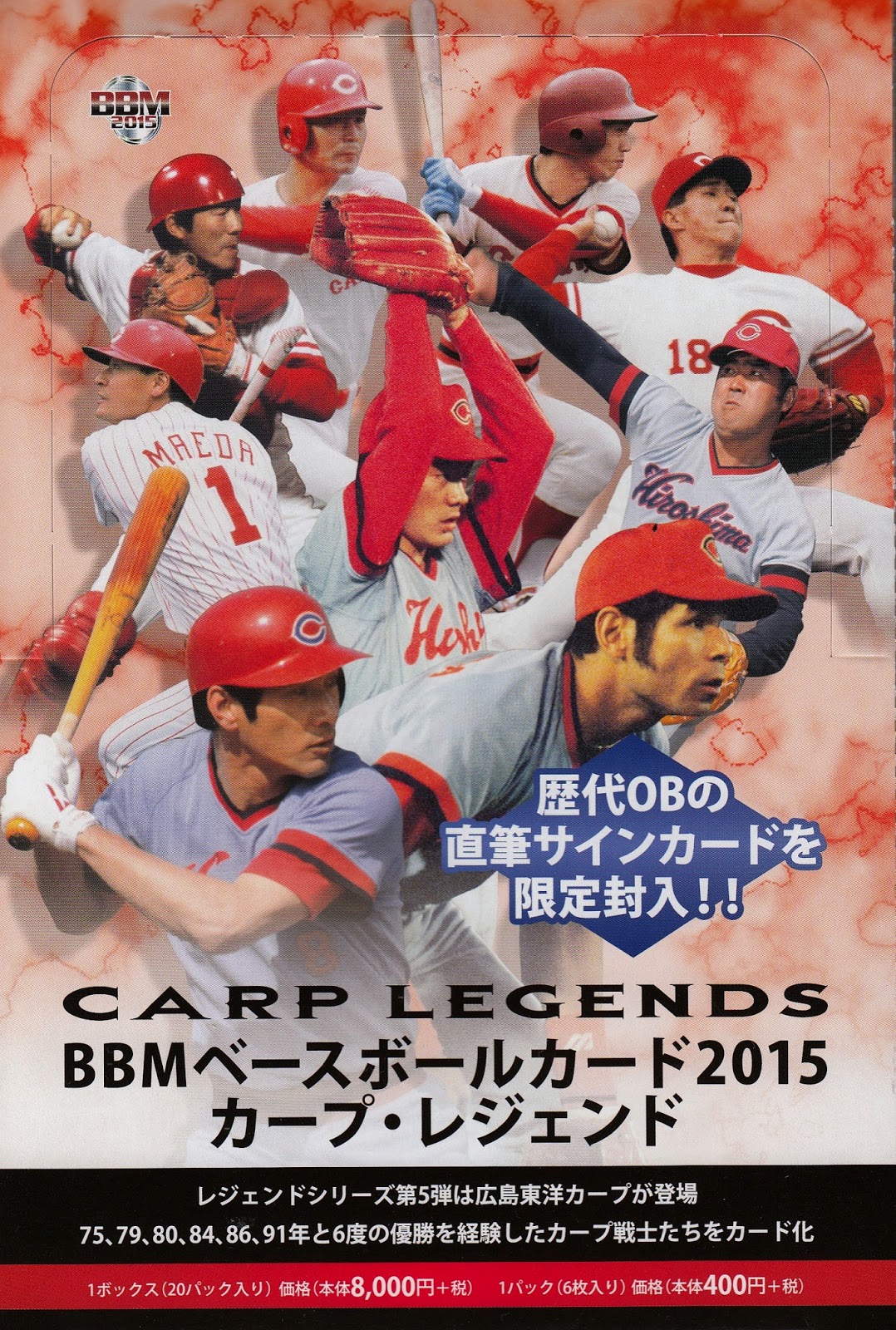 The latest in BBM's OB team set "Legends" series is for the Carp and was released just about a month ago.  The theme of the set is the six Central League pennants and three Nippon Series championships that the Carp won between 1975 and 1991 (which by the way are all of the Central League pennants and Nippon Series championships that the Carp have won).  If this theme sounds vaguely familiar to you, it's because Epoch put out a similarly themed box set last year.

The set contains 81 cards - 72 of them are for the players and managers who were part of the team between 1975 and 1991.  Like the Epoch set, this set contains most of the names you'd expect - Koji Yamamoto (who actually has two cards - one as a player and one as the manager of the 1991 team), Sachio Kinugasa, Manabu Kitabeppu, Yutaka Ohno, Yoshiro Sotokoba, Kenjiro Nomura, Tomonori Maeda and Shinji Sasaoka.  Unlike the Epoch set, it has cards for foreign players - Rod Allen, Mike Dupree, Adrian Garrett, Gail Hopkins, Tim Ireland, Jim Lyttle and Richie Scheinblum.  These are the first BBM cards for Dupree and Ireland and Allen's first BBM card since 1991.


The remaining nine cards of the set are for the Carp's "All Time Legends".  Despite being a nine card subset, this is not an "All Time Best 9" for the Carp.  It simply contains a number of star players from the Carp from the years other than 1975-1991.  The players are Sohachi Amiya (who was in the Epoch set), Hiromi Fujii, Ryohei Hasegawa, Tomoaki Kanemoto, Takeshi Koba (who's in the other subset as a manager), Makoto Kozuro, Hiroki Kuroda, Kenta Maeda (the only active 2014 NPB player in the set) and Katsumi Shiraishi.


It's a nice looking set as the Legend cards go.  Most of the photos are in color and there's a decent variety in the poses.  You can see all the cards at Jambalaya and judge for yourself.

(NOTE - the image at the top of this post is from the box that I got the set in.  I did not build this set from packs, however, it's just the box that the seller shipped me the cards in.)
Posted by NPB Card Guy at 6:52 PM

View From the Skybox said...