Card Of The Week June 18

Shun Yamaguchi left the Yokohama DeNA Baystars last winter as a free agent and signed with the Yomiuri Giants.  He had some shoulder issues that had delayed him from making a start with the ichi-gun Giants until last Wednesday.  He had a pretty auspicious debut - he combined on a no-hitter with relievers Scott Mathieson and Arquimedes Caminero to beat the Hawk 3-0.  Yamaguchi threw 102 pitches in six innings, striking out eight and walking four.  Hayato Sakamoto was the offensive hero in the game, hitting two home runs to drive in all three runs for the Giants.

As you'd expect, there aren't many cards of Yamaguchi with the Giants yet.  Here's one of them - from Calbee's Series One this year (#047): 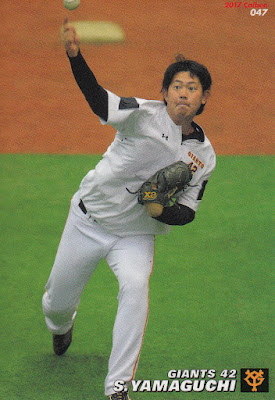