Continuing my chronicle of Japanese players playing in the North American minor leagues...

A couple of years when I was in high school, I had a subscription to get minor league cards from TCMA.  I don't remember all the detail now but they would send me a couple sets every couple weeks and I'd send them back some money.  Or maybe it was the other way around.  Anyway, I had a bunch of minor league cards in 1979 and 1980.  I remember seeing a card of a Japanese pitcher named "Kuni" Ogawa in the Brewers organization and wondering who he was and what he was doing in the minors.  With no internet and not even Baseball America yet there really wasn't anyway I was going to figure it out at the time.  But after almost 40 years, I finally can answer the question.

"Kuni" Ogawa's full name is Kunikazu Ogawa.  He was born on February 1, 1947 in Furuyama, Hiroshima Prefecture.  He went to high school at Onomichi Shogyo High School and college at Waseda University of the Tokyo Big Six.  After graduation he played for Nippon Steel in the corporate leagues before being drafted by the Yomiuri Giants in the seventh round of the fall 1972 draft.

Over the next five years he went 26-17 with the Giants.  His best year was 1974 when working mostly out of the bullpen he went 12-4 with a 3.78 ERA.  His numbers declined the following seasons and he either retired or was released following the 1977 season.  I'm not sure I'm understanding the Google translation of his Japanese Wikipedia page correctly but I think he didn't like the way Giants manager Shigeo Nagashima was using him.

He decided that he would go to North America and try to make it to the majors.  He spent 1978 playing semi-pro ball in the US and managed to attract the attention of some scouts.  Somewhere along the line he (in the tradition of Latin American ballplayers trying to sign with a Major League organization) "revised" his birthday to be five years later than it actually was.  He signed a minor league deal with the Brewers and was assigned to the Triple A Vancouver Canadians of the Pacific Coast League for 1979.

After the 1980 season he returned to Japan and NPB, signing on with the Hiroshima Toyo Carp.  He spent three years with his hometown team before spending a final season back in North America with the Aguascalientes Railroaders of the Mexican League.  He coached for Chiba Lotte in 1994-95 and also with the Samsung Lions of the KBO in 1997-98.

Probably due to his fictional birthdate when he was with the Brewers organization, his minor league stats are separated from his NPB stats over at Baseball-Reference.

As I've already mentioned, Ogawa had minor league cards in North America.  I believe that he is the first Japanese player to appear on a minor league card here.  He appeared in TCMA's team set for Vancouver in 1979 and Holyoke in 1980.  I don't have either card (anymore - I sold all those cards years ago) but I swiped the images from Trading Card DB: 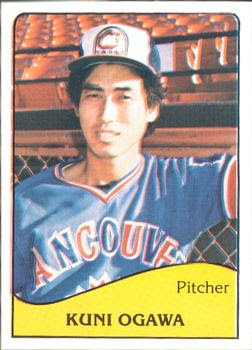 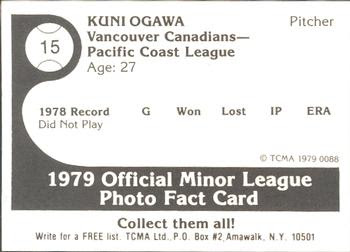 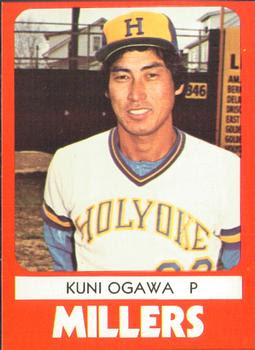 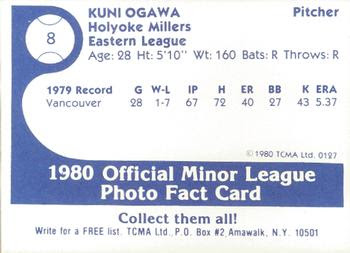