Card Of The Week June 25

Interleague play wrapped up last week and for the third year in a row, the Fukuoka Softbank Hawks were Interleague "Champions".  They ended up with an identical record as the Hiroshima Toyo Carp but they took two out of three from the Carp last weekend and head-to-head record was the tie-breaker.  This was the seventh time in the 13 years there's been Interleague play that the Hawks have won it.

Yuki Yanagita was named Interleague MVP - he hit .338 with 7 home runs and 23 RBIs over the 18 games - he was first in RBIs and second to Alex Guerrero of the Dragons in home runs.  This is the second time Yanagita has won the award - I'm pretty sure he's the first guy ever to win the award more than once.  And this time he didn't have to break the scoreboard at Yokohama Stadium to win it.  The awards were announced on Friday and Yanagita celebrated by hitting three home runs against the Lions.  Here's a card of Yanagita from the 2014 BBM Hawks Futures And Legends set (#26): 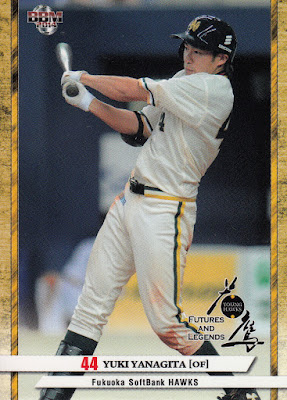