Card Of The Week - December 30 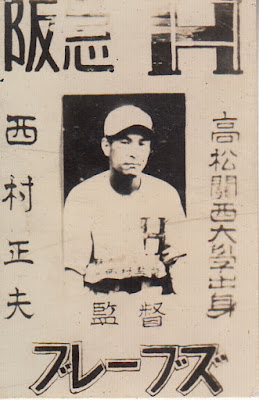 There's a couple clues to help try to narrow down when the card is from.  The uniform Nishimura is wearing was used by Hankyu between 1946 and 1949.  I don't know what the vertical text on the right side of the card says but I do understand all the rest of the text.  The kanji in the top left I think says "Hankyu" although it doesn't quite match "阪急".  The "ブレーブス" at the bottom is "Braves".  "西村 正夫" is Nishmura's full name.  The really useful piece of information is the "監督" under his photo - this says he was manager.  Nishimura actually had three separate stints as manager for Hankyu - 1943-mid 1947, 1954-56 and 1978 (as an interim manager when Toshiharu Ueda missed time with pneumonia).  Between that and the uniform I figure the card's from either 1946 or 1947.
Posted by NPB Card Guy at 10:18 AM

Nice detective work. I've catalogued a ton of 1940s sumo bromide and there are so many it is mind boggling. Still a lot more I need to catalogue too. Cool bromide for sure!

Thanks. Yeah I know what you mean. This is at least the fourth different style uncataloged bromide that I've dated to roughly 1946. I'd be curious how many Engel knows about but hasn't cataloged.

Just FYI the vertical text on the right says he is from Takamatsu (a city in Shikoku) and Kansai University.