Recently Marc Brubaker who writes the Remember The Astrodome blog had an amazing find at an antique mall near him in Houston.  He was paying for an Ebay transaction in person with the seller who had a booth at the mall and noticed the seller had a stack of early 60's Japanese menko cards in a plastic box.  Marc ended up buying the entire stack for $10(!) and discovered it contained 84 cards - 14 1963 Marusho Flag Back (JCM 13c) cards, 30 1963 Marukami Bat On Right (JCM 14f) cards and 40 1964 Marukami Bat On Right (JCM 14g) cards.  You can read Marc's post about his find here - it was a truly amazing haul for the price.

Marc contacted me with a couple questions about the lot.  I was able to help him out some but one of his questions was about something I've been wondering about for a while - who is "Ando"?

Let me explain - there's an entry in the checklist for the JCM 14g set in Engel for a guy named "Ando" who wore uniform #23 on the Tokyo Orions.  The problem is that there is no one named "Ando" on the 1964 Tokyo Orions roster.  To further confuse the issue the player on the card is wearing a helmet with #8 on it.  So who is this?

I did a couple posts on this about 10 years ago - one that shows the front of the card and one that shows the back.  My conclusion at the time was that it was most likely Kazuhiro Ishiguro who wore #23 with the Orions that year although it was possible that it was Kazuyoshi Nishiyama who wore #8.  Once Marc asked me about it I decided that maybe it was time to revisit this issue and see if I could learn anything more definitive about the issue.

Here's scans of the front and the back of the card: 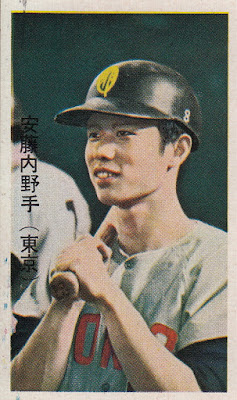 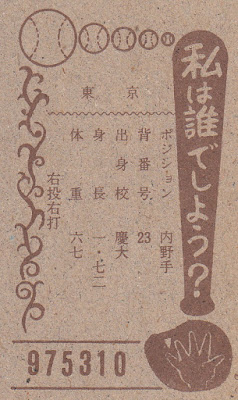 The text on the front of the card identifies the player as "Ando", his position as "infielder" and his team as "Tokyo Orions".  The kanji across the top of the back repeats the team name. Starting from the left, the columns indicate that he bats and throws right, his weight and height (don't know the values), his school (Keio University), his uniform number (23) and his position (infielder).

All of this information corresponds to Ishiguro.  In 1964 Ishiguro was a rookie shortstop for the Orions having just graduated from Keio University.  Nishiyama on the other hand was an outfielder who had just joined the Orions from the Hanshin Tigers who he had played for since graduating from Kansai University.  So the biographical information on the card clearly is for Ishiguro.  The only reason to question if the photo is Nishiyama is because of the #8 on the helmet.  But I noticed something in the photo while talking to Marc that I hadn't noticed before - the bat in the player's hands has "23" on the knob of it.  So either it's Nishiyama holding Ishiguro's bat or Ishiguro wearing Nishiyama's helmet.  I'm inclined to believe it's the latter.

But I still have no idea why the card is mislabeled "Ando".  I reached out to Larry Fuhrmann, a memorabilia dealer based in Kobe (who also was instrumental in the advent of the modern Japanese baseball card hobby).  Larry had a couple interesting things to say.

First he confirmed that it was probably Ishiguro - "Ishiguro was a 3x Best Nine shortstop in the Tokyo Big Six League for Keio so he was a well-known and highly regarded rookie in 1964. On the other hand, Nishiyama had just come over to the Orions after spending his first 5 years with the Hanshin Tigers where he was mainly used for his outfield defense. He was a lifetime .237 hitter and had over 200 at bats in a season only once in his career. So it was far more likely that the maker intended for Ishiguro to appear on the menko than Nishiyama."

Larry added some details about how the menko cards were made - "The production of menko was somewhat haphazard back then. Usually the makers just lifted photos from magazines. I am sure there are other old menko of lesser known players where the name and picture do not match.  Don't know if you are aware of this, but the most famous is the menko picturing Jackie Robinson but the name on the card is Barbon. The picture used of Jackie was lifted from Baseball Magazine and was taken during the Dodgers 1956 Japan Tour. His cap has the Brooklyn "B" on it. Chico Barbon (who is also black) played for the Braves.  Another one is a menko picturing Larry Raines (black player who played for Hankyu) but the name is also Barbon. "

Larry included a photo of the Barbon/Robinson card (from the 1958 Doyusha "Team Name Back" set - JCM 30a): 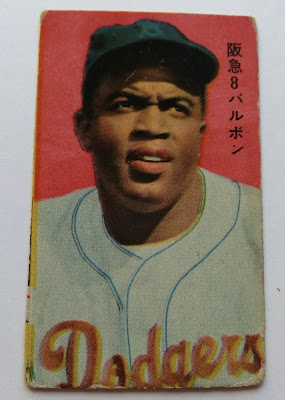 He also included photos of the magazine that the photo was lifted from (December 1956 Baseball Magazine): 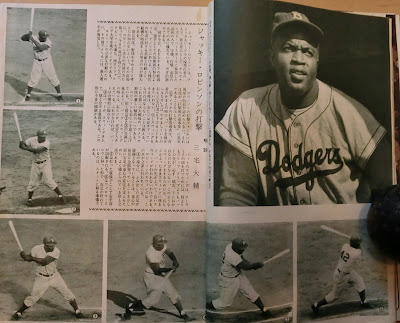 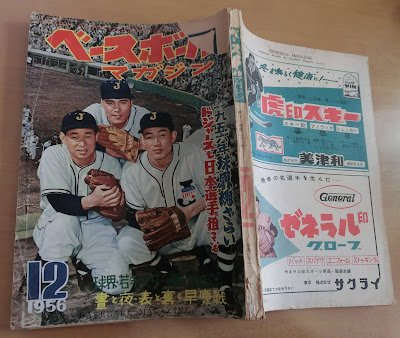 This tendency to swipe photos from other sources continues to this day.  I have a cards from an uncataloged 70's menko set and a 1988 bromide set that reused images from Calbee cards.  Ryan from This Card Is Cool has told me that there are unlicensed bromide cards for J-Pop groups that use photos from magazines as well as the internet.

So to sum up - the card is most likely Ishiguro.  The menko card manufacturer identified the player as "Ando" for no reason probably other than that they were being sloppy.

I want to thank both Marc and Larry for their assistance with this post.  Marc's already updated the Trading Card Database listing for the JCM 14g set to acknowledge the card is really Ishiguro - it had previously identified the player as Junzo Ando who never played for the Orions.
Posted by NPB Card Guy at 8:47 PM

Great write up and nice piece of history on these older menko!