Size: 372 cards numbered 1-336, CS01-CS36
Cards Per Team:  28 (team card, manager + 26 players)
Team Card Theme:  Spring Training
Number Of Leader Cards:  N/A
Checklists:  None
Subsets:  Cross Sunrise (36)
Inserts:  Japonism(12), Beginning (12), Dominator(12), 3D Cross Sunrise (12, #'d to 25)
Memorabilia Cards: Jersey cards for YukiYanagita and Seiya Suzuki.  Each jersey card is serially numbered to 200 plus a parallel patch version numbered to 20.  I think there may be a combination jersey card (and a parallel patch version) but I can't find .  There are a large number of autograph cards available as well - including ones with multiple autographs
Parallels:  12 regular player cards have a "secret" alternate photo version.  108 regular players cards (9 per team) have facsimile autograph parallels - silver, gold (#'d to 100), holograph (#'d to 50), red (#'d to 25) and green (#'d to 10) - this includes the "secret" versions of the cards as well.  (I think the 1st round picks for each team are included in the 108 players.)  80 of the rookie cards have three numbered parallel versions - "Foilboard" (numbered to 200), "Holo Foil" (numbered to 100) and "Green Foil" (numbered to 50).  The "Cross Sunrise" cards have three parallel versions - "Gold Foil" (numbered to 100), "Holo Foil" (numbered to 50) and  "1 of 1".  There are parallel versions for the "Beginning" (#'d to 100) and "Dominator" (#'d to 50) inserts but I couldn't find any evidence that there was a parallel version for the "Japonism" inserts.
Notable Rookies: Akira Neo, Kyota Fujiwara, Kosei Yoshida, Hiroshi Kaino, Koji Chikamoto

BBM's 1st Version set is rapidly becoming like their Rookie Edition set in that it is so monotonously similar from year to year that I don't have a whole lot to say about it.  For the fifth year in a row the base set has contained 372 cards that are split between 324 player (and manager) cards, 12 team checklists and a 36 card "Cross Something" subset that will be continued in the 2nd Version set in August.

On the plus side it's a nice looking set (as usual).  I don't think BBM's done a design I didn't find attractive for a 1st Version set since maybe 2005.  On the minus side I have my usual complaints. The first one is that limiting each team to only 26 players and insisting on having cards of each non-ikusei draft pick means that deserving players don't show up in the set.  I complain about this every year but then struggle to pick an example.  This year I'll go with Dennis Sarfate, Tsuyoshi Wada and Louis Okoye although in fairness to BBM - Wada's only played with the Hawks' farm team, Sarfate hasn't played in ANY games yet and Okoye has been less than effective.  On the other hand last year they didn't have a card of the eventual Pacific League Rookie Of The Year Kazuki Tanaka in either the 1st or 2nd Version sets so it may be that a major omission will eventually present itself.

My second and bigger usual complaint with the set is the mind-numbing repetition of the same poses.  There's way too many photos of pitchers pitching and batters batting.  The Lions cards are the worst offenders in the set - every single non-rookie pitcher is depicted in pretty much the same pose - in the middle of their motion with the ball cocked in their throwing arm behind their head: 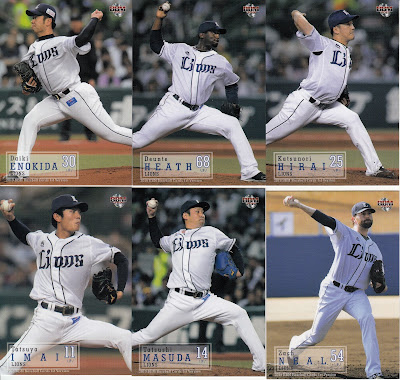 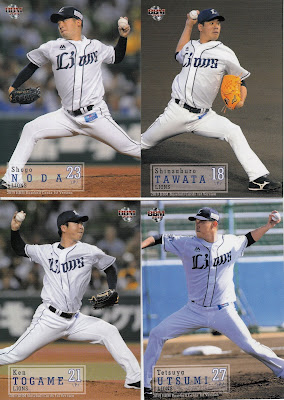 Most of the photos were taken last season.  The exceptions of course are the newcomers for each team - the cards for the rookies, free agents and newly signed foreign players were taken in the early part of spring training in February.  The other exception to this is the Dragons - because they have new uniforms this year all of their photos were taken this February.  As a result they have the most interesting photographs.

Here's some example cards - for the most part I tried to get some of the better photos:


I'm pretty sure Tomoyuki Sugano's photo is from his no-hitter in the First Stage of the Climax Series last October - in fact it looks like this photo and the one on his Epoch One card were taken at the same moment from different angles:

Last year I beat BBM up for using a photo of Norichika Aoki at his press conference when he returned to the Swallows instead of an on-field photo.  They did a similar thing this year with Josh Ravin of the Marines - I have no idea why they didn't use an on-field photo of him like they did in their Marines team set that came out a week or so before this set came out.

The backs are the standard BBM flagship backs - just the rearranging of the usual ingredients:

The team checklists show scenes from early spring training again.  This was getting a bit stale but this year BBM included several more silly photos than they've done in the past.  Here's a couple:


I don't have much to say about the "Cross Sunrise" cards - as I said last year, if you've seen one of BBM's previous "Cross Something" cards, you pretty much seen these:

I splurged a little this year when I picked up this set off of Yahoo! Japan Auctions.  The set I bought included half of the "secret" version cards, the entire "Beginning" insert set and eight of the twelve "Dominator" inserts.

The "Beginning" insert set features one young player for each of the 12 teams.  Half of the cards are for rookies and the other six were drafted in the previous two years (2016 or 2017).

The "Dominator" insert set features one "dominating" player from each team.

As always you can see all the cards (including the inserts, parallels and "secret" versions) over at Jambalaya (the rarer parallels are here).
Posted by NPB Card Guy at 9:30 PM

The Sumo sets are getting stale too. I feel like BBM sees these sets as “chores” now instead of opportunities.

As a prospect-oriented a-hole, all I can think is "wake me up when Neo's second year autos hit the market".