Card Of The Week April 7

Tohoku Rakuten Golden Eagles manager Yosuke Hiraishi had to get kind of creative today in their game against the Orix Buffaloes.  The Eagles were down 5-1 in the seventh inning when he pinch hit for his starting catcher Motohiro Shima with Louis Okoye to lead off the inning.  Okoye struck out but the Eagles managed to score a run in the inning.   Backup catcher Yuichi Adachi replaced Shima in the field for the next two innings.  When Adachi's spot came up in the ninth with one out, Hiraishi brought in Kazuya Fujita to pinch hit for him.  Fujita hit a single that started a game tying rally for the Eagles.  But now the Eagles were in a bit of a pickle - the game was tied but who was going to catch?

Hiraishi took his first baseman, Ginji Akaminai, and suited him up in the tools of ignorance.  This was not quite as random as it seemed since Ginji (as he is known) had played catcher in high school and was actually drafted by the Eagles in 2005 as a catcher.  But he hadn't played the position since 2009 with the ni-gun team and had never caught in an ichi-gun game.

With two outs in the bottom of the ninth Orix center fielder Hayato Nishiura singled and probably everyone in the ballpark figured he was going to try to test Ginji's arm.  On the second pitch to Masataka Yoshida Nishiura broke for second.  Ginji's throw sailed to the first base side a little but shortstop Eigoro Mori made a nice play to grab the throw and slap the tag on the head first sliding Nishiura to end the inning:

The Buffaloes failed to get a baserunner in the remaining three innings so Ginji was not challenged again.  He didn't make any errors and wasn't charged with any passed balls so the emergency move by Hiraishi was an apparent success.

Ginji's first appearance in a BBM flagship set shows him as a catcher (2006 BBM 1st Version #212).  I don't know how many cards he has showing him in catching gear - I'm pretty sure I don't have any others but after looking through Yahoo! Japan Auctions I can say that at least his 2009 BBM Eagles card shows him catching.  Here's his 2006 BBM rookie card: 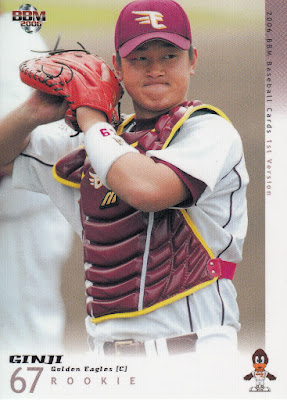