Card Of The Week April 21

Having let Craig Kimbrel leave as a free agent, the defending World Champion Red Sox have turned to former Carp pitcher Ryan Braiser to be their closer this year.  Brasier was originally drafted by the Angels and made his MLB debut with them in 2013.  He missed the entire 2014 season due to an elbow strain and was released by the Angels at the end of the year.  The Athletics picked him up and he spent two seasons in their organization before he headed to Japan.  He spent 2017 with Hiroshima, going 2-1 with a 3.00 ERA in 26 games with the ichi-gun team and going 0-0 with an ERA of 1.35 in 19 games with the Carp's farm team.  He returned to the US late last winter, signing with the Red Sox on March 4th and split last year evenly between Triple-A Pawtucket and the major league team, appearing in 34 games for each team.  He also pitched for the Red Sox in each round of the post-season last year.  Here's Brasier's card from the 2017 BBM Carp "Successful Achievement" set (#17) celebrating the team's second consecutive Central League pennant: 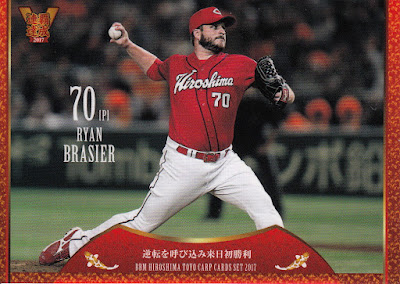 This season has not been kind so far to either the Red Sox or the Carp.  They both have nearly identical records - the Red Sox are 8-13 while the Carp are 8-12.  They have both moved out of last place lately but part of that has been because of more hapless teams (the Baltimore Orioles and the Hanshin Tigers) although both teams won their first series this weekend.
Posted by NPB Card Guy at 12:05 PM