I did a post last month about the autograph/memorabilia cards for the 2018 Japanese Collegiate All Star team that Panini had included in their USA Baseball Stars & Stripes set.  A couple weeks later I started seeing non-memorabilia cards for the team on Ebay as well.  Apparently Panini sells a version of the set called a "Rack Set" - for $14.99 you get a complete 68 card base set "featuring the players on the 2018 USA Baseball Collegiate, 18U and 15U National Teams.  Each rack set also includes 2 autograph cards numbered to 100 from the 2018 national teams and 1 EXCLUSIVE 2018 Japanese Collegiate All-Star base card."  So the cards I've been seeing on Ebay are basically insert cards associated with the "Rack Set" sets.

As far as I can tell, all 24 players who had autograph/memorabilia cards in the original set have the non-memorabilia cards as well.  I've managed to pick up about half the set so far.  Here's some example cards:


The images of the players on these cards appear to be the same as the images on their autograph/memorabilia cards.  All of the player images are superimposed on the same infield background.

The backs of the cards are an improvement over the autograph/memorabilia cards in that there's a little bit of biographical information as well as a write up of the player's performance during the USA vs Japan All Star Series last July: 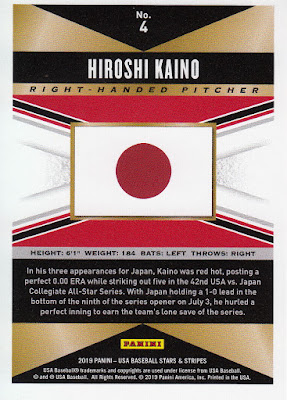 This is certainly a much more affordable way to put together a complete set of these players than trying to do it with the autograph cards.  I've seen two complete sets on Ebay - one for $80-ish and the other for $100 - but I've only spent around $30 on the 12 cards I've gotten so far.
Posted by NPB Card Guy at 7:55 PM

Great looking set. This should be a fun, yet challenging set to build. Best of luck!

Thanks! I have a feeling this is my new White Whale!