Card Of The Week March 7

I had mentioned a few months ago that former Hokkaido Nippon-Ham Fighters pitcher Masaru Nakamura was the only Japanese player in this past winter's Australian Baseball League.  Nakamura's team, the Brisbane Bandits, had published a card set and I was able to get his card from Shane, who along with Steve Smith are my main sources for Aussie cards.  Shane had mailed it out a few weeks ago and it showed up at my house last week. 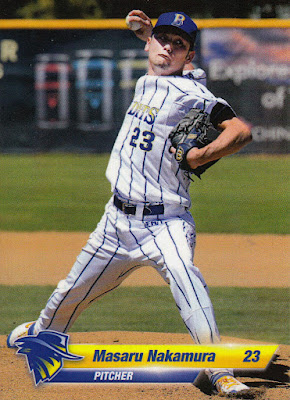 Nakamura's card was not the only thing I got in the mail last week.  I finally received the box from Ryan yesterday.  I'm going to be busy over the next few weeks dealing with the roughly 2000 cards he sent me.