Card Of The Week August 15

Carter Stewart, the Atlanta Braves top draft pick from 2018 who went unsigned due to the team lowballing him because he had a wrist injury and ended up signing with the Fukuoka Softbank Hawks in 2019, made his first ever start with the ichi-gun Hawks today.  It went extremely well - Stewart threw 80 pitches over five innings, striking out nine Hokkaido Nippon-Ham Fighters, walking none and giving up no hits.  He did hit one batter which was the only batter to reach base against him.   After he left the game, five relief pitchers for the Hawks - Yuki Tsumori, Shinya Kayama, Yuki Matsumoto, Yugo Bandoh and Hiroshi Kaino - threw an additional four no-hit innings, completing a combined no-hitter.  This is only the fifth combined regular season no-hitter in Japanese professional baseball history and it by far had the most pitchers to ever combine for one.  The previous high was three which was done twice - by the Fighters in 2006 and the Giants in 2017.  It also occurred exactly a year after the last no-hitter in Japan - Yasuhiro Ogawa's one on August 15th, 2020.

There really are only two downsides to this story.  The first is that NPB does not recognize combined no-hitters as "official" no-hitters.  The second is that the Hawks themselves only managed to get three hits off of five Fighters pitchers and didn't score any runs, so the game ended as a 0-0 tie.

Here are the highlights of the game from Pacific League TV's YouTube channel: 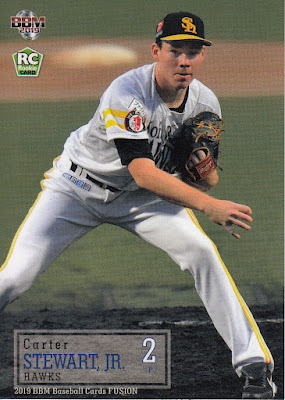