Card Of The Week August 22

Takeya Nakamura came up with the bases loaded in the first inning today against the Orix Buffaloes in Osaka and did what he's done 21 times before, more than any other batter in NPB history:

It was Nakamura's 10th home run of the season and the 434th of his career.
I've been tracking Nakamura's progress towards 500 home runs for a number of years now and I have to say that I'm losing faith that he's going to get there.  He only had 9 home runs in 79 games last year and while he's hitting much better this year than last, he now has 10 home runs in 80 games this year which is essentially the same pace.  He turned 38 a week ago and he's...uh...not someone who immediately impresses you with his physical conditioning (it's not for nothing that his nickname "Okawari-kun" means "another helping").  I'd love to see him prove me wrong - it wouldn't be out of character for him to get those 66 home runs he needs before he turns 40 in two years - but I fear it isn't going to happen.
I thought I'd share the 2009 BBM 1st Version Leader card (#439) commemorating him leading the Pacific League with 48 home runs in 2008.  It was the first of six times that he led the PL in this category. 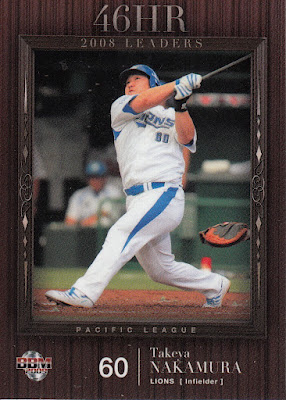