I've mentioned numerous times that Hideo Nomo has not had a Japanese card - at least not one depicting him in an NPB uniform - since he left Japan for the Dodgers after the 1994 season.  Recently I learned that that's not completely true.  I saw a seller on Ebay who had listed a 2018 BBM card of Nomo (I hesitate to say he's "selling" it as I don't want to give any credibility to the ridiculously high price he's asking for it - over $600!).  I swiped the images of the front and the back of the card from the auction: 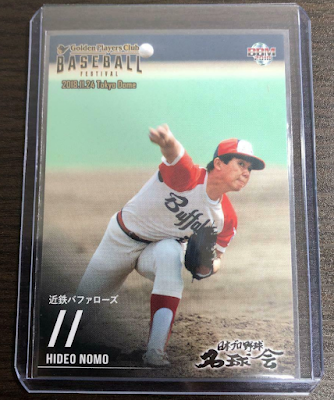 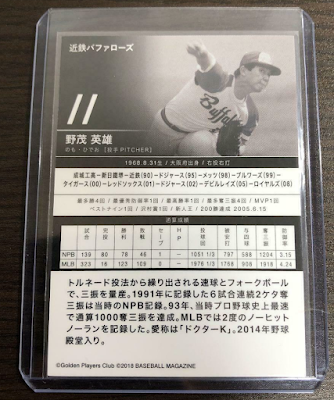 In fairness, this appears to be some sort of promotional card for a Meikyukai event at the Tokyo Dome in November of 2018 and not something that would have come out of a pack or a box.  But still, this is the first Japanese card that I've seen of Nomo in a Buffaloes uniform since 1994.
UPDATE - I got several responses on Twitter to my tweet about this card from folks who attended the Meikyukai event which was essentially an old timers game.  Apparently it was billed as a "Nomo vs Hiroki Kuroda" game.  RT_262 tweeted out a number of photos from the game which he was kind enough to give me permission to include in this update:

RT_262 is a Marines fan and attended the game to see Kazuya Fukuura who had just joined the Meikyukai two months earlier and was still an active player at the time.


The Nomo card was not the only card for the event.  RT_262 shared the card for Fukuura.  He said that the cards were given away when you entered the Dome. 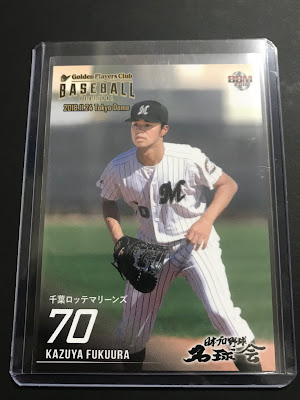 Kicks82 shared the card he got of Harimoto: 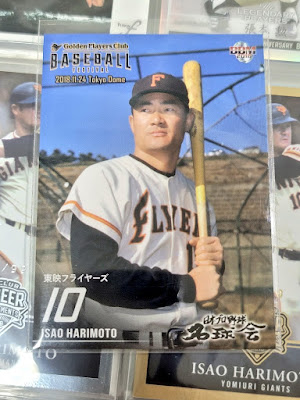 He also shared the promotional image for the event: 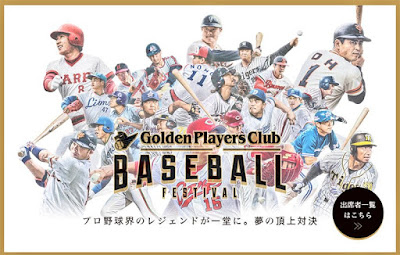 I really like how the cards look.  I'd love to find some of these for myself.
Thanks to RT_262 and Kicks82 for sharing their photos!
Posted by NPB Card Guy at 8:13 PM

Interesting. It does look like it was something distributed at that event rather than packs. 600$ is a hard pas!

Surprised BBM hasn't produced any Nomo tribute sets over the years. Isn't he considered a huge superstar among Japanese baseball fans? Or were people upset that he chose to cross the Pacific and plan in the MLB?

He is still considered a huge superstar and he was inducted into the Hall Of Fame on the first ballot, only the third player ever to do so (besides Victor Starffin and Sadaharu Oh). I really don't know if he's not allowing cards of himself or if the card companies (really BBM or Epoch at this point) don't want to include him - perhaps for fear of offending NPB. Keep in mind that Nomo embarrassed NPB by exploiting a loophole that allowed him to become an international free agent by voluntarily "retiring".