Card Of The Week November 28

The Tokyo Yakult Swallows wrapped up the 2021 Nippon Series Championship with a 2-1 12-inning victory over the Orix Buffaloes in Kobe yesterday.  It was the Swallows first championship since 2001 and broke an eight year Central League losing streak in the Nippon Series - the last CL team to win the championship was the Giants in 2012.  It was the only extra inning game of the season in Japan and capped a very exciting Series.

BBM did box sets for the Nippon Series from 1991 to 2012 which included cards for all the players who appeared in each Series along with cards featuring the winners of the MVP, Fighting Spirit and Outstanding Player awards.  As I've done every year since 2014 (I didn't learn BBM wasn't doing a set for the 2013 cards until a month or so after the Series ended), here are cards of all the award winners:

Additionally the 2021 Korean Series wrapped up about a week and a half ago with the KT Wiz sweeping the Doosan Bears to win their first ever championship.  Park Kyung-soo was named MVP of the Series and here's his 2015 Superstar Baseball Season Two card (#SBC1502-127-N): 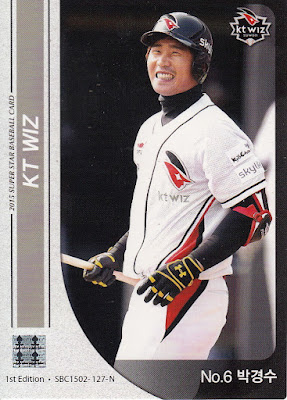