Card Of The Week September 28

The Carp played their last regular season game at Hiroshima Municipal Stadium (Hiroshima Shimin Kyujo) on Sunday against the Swallows (they could possibly play there again if they win the Central League Climax Series and play in the Nippon Series). They will move into a new ballpark next spring. There's a discussion of the new park and pictures here. 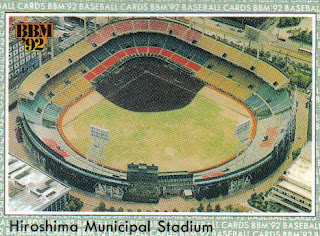 This is the fourth ballpark in the 11 card subset that is no longer in use, joining Heiwadai, Fujiidera and Nagoya.

Update: I'd meant to include a link to Deanna Rubin's post about her visit to the ballpark also. Great pictures as always. Also, in this week's Pro Yakyu Weekly, Michael Westbay points out a couple of related links - one to Wayne Graczyk's Baseball Bullet-In column in the Japan Times dealing with the closing of the ballpark and to the Japanese Wikipedia entry on the park. The Japanese Wikipedia entry on the new park has photos of the model and of the construction.

Finally, here's the Google Maps view of the old park:

While I wish the Swallows hadn't dropped yet another game, part of me is glad the Carp were able to win their last game at Shimin Kyujo. While it definitely time for a new stadium, it's a bit sad that the new stadium will no longer have that prime location.
Any idea what Hiroshima's plans are for the site? I really hope they think of something better than yet another shopping mall or pricey residential tower, but I have a feeling no other option was ever even seriously considered.

I'm curious since I've never been to the park (or Japan for that matter) - what makes the old park's location prime? Isn't the new park next to a train station?
I haven't heard anything about the plans for the old park's site.