My 2008 BBM Yokohama 30th Anniversary set arrived the other day. As I mentioned before, after the 1977 season the Taiyo Whales moved from Kawasaki to Yokohama. They changed their name first to the Yokohama Taiyo Whales, then in 1993 to the Yokohama BayStars. (They are the only team in Japan to not have their ownership reflected in their official name.) BBM released a 99 card set to commemorate the 30th Anniversary of the team bing in Yokohama.

The first 63 cards of the set are all OB players and managers. As with the other Anniversary sets that BBM has put out, this includes not only retired players, but former Baystars still playing both in NPB (Motonobu Tanishige) and MLB (Takashi Saitoh). Significant players and managers include Kaoru Betto, Kazuhiko Endoh, Masaji Hiramatsu, Norihiro Komada, Leon Lee, Makoto Matsubara, Bobby Rose, and Kazuhiro Sasaki. I have to confess that I don't know enough about Yokohama to notice if anyone significant is missing, although I would have liked a Felix Millan card. Here's the cards of Leon Lee (#40) and Motonobu Tanishige (#33): 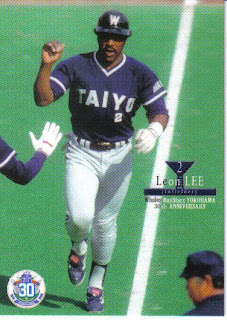 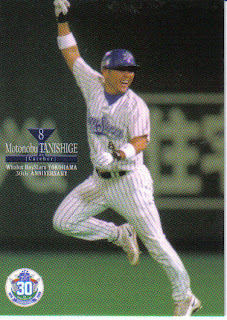 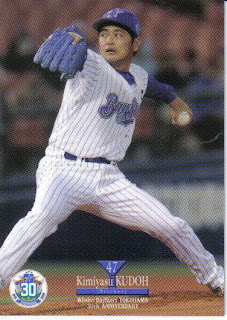 The next 9 cards feature the position players of the 1998 Nippon Series champion BayStars, along with a card celebrating the team's championship. Here's the Takuro Ishii card from this subset (#82): 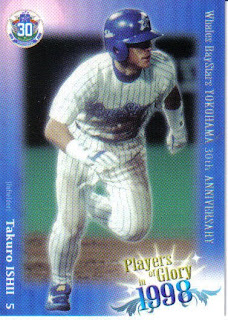 The final 9 cards of the set are the "The Big Scene" subset. These cards commemorate significant events in the BayStars/Whales 30 seasons. This includes Masaji Hiramtsu's 200th win in 1983, the "Super Car Trio" of Takagi, Katoh and Yashiki in 1985, Tatsuhiko Kinjoh's Rookie Of The Year award in 2000 and Takuro Ishii's 2000th hit in 2006. Here's the card celebrating the first game in Yokohama (#91): 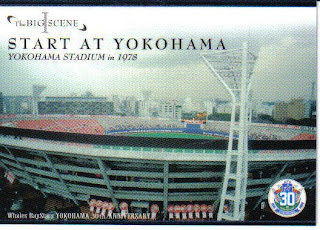 I have to say that I was kind of disappointed with this set. Maybe it's just my unfamiliarity with Yokohama, but I just wasn't real impressed with it. A lot of the pictures seem blurry and dark and it just kind of seems like a sloppy job by BBM, especially compared to the Lions and Hawks Anniversary sets.

BBM has now done Anniversary sets for six of the twelve teams in NPB - the Giants (70th in 2004), the Tigers (70th in 2005), the Dragons (70th in 2006) and the Lions, Hawks and BayStars this year. I'm curious if they plan sets for any of the other teams. The Marines and Swallows will celebrate the 40th Anniversaries of their ownership by Lotte and Yakult respectively next year. The Fighters will have their 35th Anniversary of their ownership by Nippon Ham next year also. Orix bought the Braves from Hankyu 20 years ago next year. And the Carp will celebrate their 60th Anniversary in 2010. I could see BBM doing sets for all of these, leaving only the Golden Eagles (who are going into only their fifth season next year) without an Anniversary set.
Posted by NPB Card Guy at 8:15 PM