The 2009 NPB Draft was held yesterday. Deanna Rubin has published the list of players drafted both here and (with pictures) here.

Most of the players who were picked will have their first cards ever in the 2009 BBM Rookie Edition set, which should come out next February. For the first time ever, however, a couple of these guys already have cards. They appear in last spring's BBM Tokyo Big 6 set. 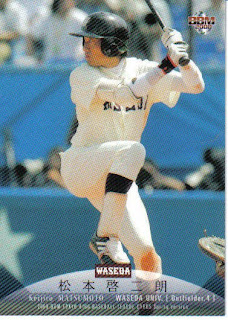 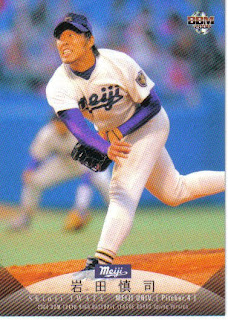 It is entirely possible that there are additional cards of these players in the Fall Version of the Tokyo Big 6 set. It is also possible that there are cards of these and other players in the collegiate National Team Set. I can't say for sure since I don't have either set yet (the National Team set was just released yesterday).
Posted by NPB Card Guy at 8:07 PM

hey -- I got the fall set of the Tokyo Big 6 even though I didn't get the spring set, and I love it. It looks a lot like those Spring ones, though...

All of the drafted guys are in there, of course, but the reason I got it was for my daigaku-league boyfriend Tatsuya Ohishi. I guess I have to start spelling it that way (instead of Oishi) now because it was on his card. Sigh.