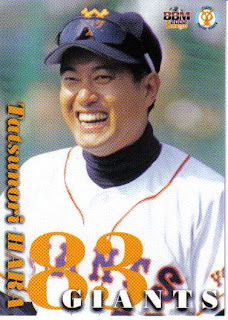 Giants manager Tatsunori Hara was named manager of Japan's World Baseball Classic team last week. Hara will be replacing Sadaharu Oh, something he should be familiar with since he replaced Oh in the Giants lineup back in 1981. (The card above is from the 2002 BBM Giants set, card #G1.)

In other WBC news, it appears that Topps has replaced Upper Deck as the official card producer for the tournament. The new Topps "Updates and Highlights" set features a 25 card insert set that they're calling the "2009 WBC Preview" set. It contains cards of players who appeared in the 2006 WBC. I think all the players in the set are in MLB or at least signed to MLB teams with the exception of Paul Bell, a South African player who used to be in the Brewers organization.

There are four Japanese players in the set - Ichiro, Daisuke Matsuzaka, Kosuke Fukudome and Akinori Iwamura. Neither Fukudome or Iwamura appeared in either Upper Deck's WBC box set or Inaugural Images set, although I think Fukudome appeared in one of the other couple of insert sets Upper Deck scattered WBC players through in 2006.

Hopefully, Topps will do a better job than Upper Deck with the 2009 cards. I'd like something akin to Upper Deck's 1994 World Cup set, but that may be asking too much.
Posted by NPB Card Guy at 3:59 PM