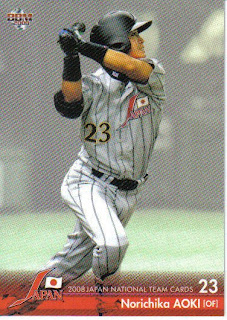 I picked up the 2008 BBM "All Japan National Team" box set the other day from someone on Ebay. This is the set for the Olympic team, but I'm guessing that for some licensing reason, BBM can't acknowledge that. There's 28 cards, one for each of the 24 team members and 4 coaches (including manager Senichi Hoshino). (The actual box set contains an insert card also - there's a 28 card insert set. Since I bought essentially an open box, I didn't get an insert card.)

The set is what it is. It's not particularly spectacular in any way, but it's nice enough. I don't like the greyed-out backgrounds though. It looks like everyone's playing in a fog (hmm, remind anyone of Game 1 of the 2005 Nippon Series?)
Posted by NPB Card Guy at 1:55 PM