Card Of The Week November 23

I can be remarkably stupid at times.

This, I fear, comes as no great shock to anyone who knows me well. (Hmm, perhaps that sentence could be equally true without the "well".)

The latest manifestation of my stupidity involves the manager of the Orix Buffaloes. Back in May when Terry Collins resigned as Orix manager, I saw that the new manager was "Ohishi Daijiro" and because I'm an idiot (and I don't speak Japanese), I assumed his family name as "Daijiro". Now, if I were more familiar with Japanese names, I assume that I would have realized that that was stupid. So I looked in my baseball card database and in Japan Baseball Daily's Data Warehouse for an Ohishi Daijiro. Surprise, surprise...I didn't find him. So I wrote something about not being sure he had ever played pro baseball and moved on. And didn't pay any attention any other time that I read or heard his name mentioned.

I realized today that I'd been stupid and I should have been looking for "Daijiro Ohishi" instead. Given that he played 17 years for the Kintetsu Buffaloes, it turns out I have a bunch of cards of him, including cards in both the 2000 BBM 20th Century Best 9 set and the 2002 BBM All Time Greats set. Here's one of the cards from the 20th Century Best 9 set (#296): 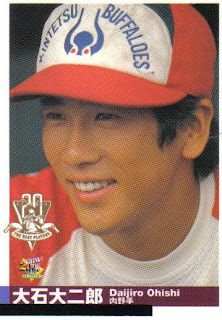 So, my apologies to Ohishi-kantoku and anyone who I misled. All I can say is "D'oh!"
Posted by NPB Card Guy at 9:00 AM