Card Of The Week November 2

Lions pitcher Hideaki Wakui pitched eight innings of one hit ball and defeated the Giants 2-1 in Game One of the Nippon Series yesterday. Here's his 2005 BBM 1st Version rookie card (#37): 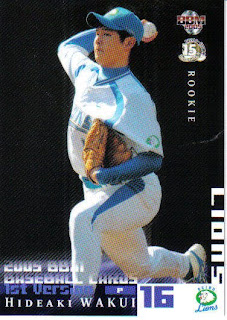 I'm pulling for the Lions not simply because they're playing the Giants (and they are probably my favorite Pacific League team), but also because I'd like to see as much of this happen as is possible. Now, since that post appeared, the Samsung Lions were eliminated in the KBO (the SK Wyverns won the championship the other day), so four Lions is no longer possible. However, the Uni-President 7-Eleven Lions could still win the CPBL (Taiwan) championship (Game 7 is probably finishing as I write this), so a three Lions series is still possible. We should be able to find out by checking here later.