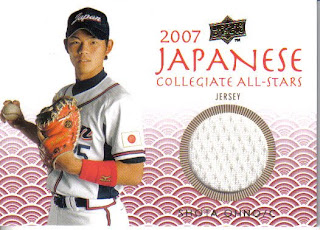 I was being a little lazy when I wrote this post the other day talking about the 2007 Japanese Collegiate All Star jersey cards that were inserted into the 2008 Upper Deck Team USA sets. I was kind of vague on where the players in the set were because I just didn't have time to look anyone up. But when Deanna left a comment raving about the players in the set, I figured I should pay a little more attention. So here's a list of the players, their college (if I could figure it out) and their current status. (I'll point out that the cards have no information about the player other than his name and position). 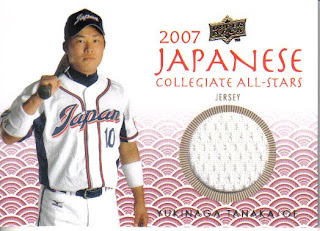 The card at the top is Shota Ohno (#JN-15) and the one on the bottom is Yukinaga Tanaka (#JN-18). I got the information for this post from a number of sources, including Marinerds, Yakyu Baka and Japan Baseball Daily. You know, I think it says something about the quality of information being published in English by these sources that a non-Japanese reader like myself was able to track down information on 19 of the 22 guys in the set.

Update: I wasn't paying enough attention. This is actually the "low end" memorabilia insert for the Japanese team in the set. There are five other sets of memorabilia inserts for the set, all with limited print runs. There are three sets that feature all 22 players: autograph cards (print run of 50 apiece), jersey patch cards (print run of 20 apiece) and jersey letter cards (print run of 15 apiece). There's a card (with a limited run of 5) featuring autographs of both Pedro Alvarez and Shinya Muramatsu (team MVPs). And finally, there's a set of Japan flag patch cards with a limited press run of 1 each. For some reason, this set only has 21 cards - there's no flag patch card for Shota Ohno.

FURTHER UPDATE: I filled in the missing information based on Deanna's comments.
Posted by NPB Card Guy at 8:17 PM

I've never heard of any of these guys... but I like the design of the set and enjoy collecting Japanese players.

Hopefully a few of them will play in the states.

The Carp player is actually Tetsuya Kokubo, they have a typo on their site (is it also on the card??)

Anyway, here are some things to correct or fill in your blanks:

Sho Aranami was from Tokai University, and is still at Toyota... for now...

Tomoyuki Kaida was at Komazawa University and is now at Nihon Seimei (assuming it's who I think it is, without kanji it's hard to confirm)

Shiro Mori is from Kinki University and is now at Panasonic.

Shinya Muramatsu is a senior at Kokugakuin University this year and is not entering the draft. Not sure why exactly.

Shota Waizumi is at Toshiba... he registered for the draft last year but quite frankly his best feature is his speed, which wasn't enough to get him drafted. He experimented with being a switch-hitter at Yokohama HS and at Hosei but it just didn't work out. He was an interesting guy, though.

Yeah, I should have fixed that misspelling - I had his name right in my card database. But it is misspelled on the card.

Thanks for the information.