Card Of The Week October 24

It's been a good baseball weekend for me. Friday night, the Rangers defeated the Yankees to advance to the World Series - more importantly to me, it meant that the Yankees wouldn't be advancing to the World Series. Saturday night, the San Francisco Giants defeated the Phillies to join the Rangers in the World Series - the Giants being one of my favorite teams due to my having lived in Silicon Valley back in the 70's (and yes, I realize that one of my readers might not share my joy on this one). But more relevant for this blog is that in Nagoya on Saturday night (or morning here in Maryland), the Dragons defeated the Yomiuri Giants to advance to the Nippon Series - this being good for me because (1) the Dragons are my favorite Japanese team and (2) the Giants, being the Yankees of Japan, are my least favorite Japanese team.

Anyway, the Dragons won Saturday's game in walk-off fashion when Kazuhiro Wada hit a single that scored Ryoji Nakata from second (which if you've ever seen Ryoji Nakata then you're surprised that he could actually score from second on anything less than a double). In honor of this, I present two cards of the week this week, one for Wada and one for Nakata: 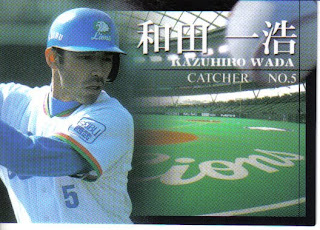 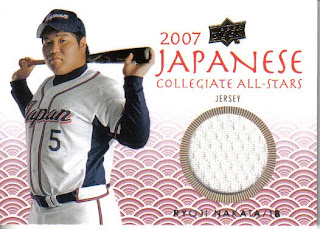 The card of Wada is from the 2001 Broccoli set (#093), back when he was a member of the Lions. Broccoli made sets for the Lions from 1999 through 2001, basically to cash in on Daisuke Matsuzaka.

The card of Nakata is a jersey card from the 2008 Upper Deck Team USA set. OK, I guess that needs a little explanation. In 2008, Upper Deck released a box set featuring the 2007 National and Junior National Teams USA. In addition to the regular cards in the set, each box contained possible autograph and memorabilia cards. One of the sets of memorabilia cards were jersey cards for the "2007 Japanese Collegiate All-Stars". There's 22 of them and the checklist contains a handful of guys (like Nakata) who've already gone on to NPB as well as the big prize in the upcoming draft, Yuki Saitoh.
Posted by NPB Card Guy at 6:58 PM

That is a BADASS set of players! Half of them are already in the pros, and most of the rest are industrial league superstars! WANT!

I wonder if such a set exists in Japan too -- I get the feeling there are other collegiate cards that I just never actually see because my head is so deep in Tokyo Big 6.

As far as I've seen, BBM is the only one making college cards. I haven't seen anything else on kuboTen. But I think you'd know better than me.

Been meaning to ask you this also - have you ever seen baseball cards for any of the independent league teams in Japan?

Nope, I haven't. My guess is that some of those teams switch players around so much that it'd be impossible to make a reasonable card set, plus it's unclear how many people would even buy such a thing -- a lot of indie teams are somewhat shaky financially to begin with.

But I suppose I could try to research a little if you want me to...

Would they have more of turnover in players than indy league teams in the US? A lot of those teams do team sets even though by the end of the season the team on the field doesn't much resemble the team in the set (which also happens for the teams in the affliated minors as well).

Please don't go out of your way to do any research. I'm just curious to know, but I don't think I'd be trying to get any if they exist. I haven't bought any of the Ibaraki Golden Golds sets I've seen on kuboTen.

Which reminds me of another question for you - what are the Ibaraki Golden Golds? Are they some sort of celebrity baseball team?

Thanks for the info.