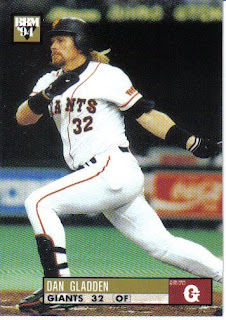 Jason asked an interesting question in a comment to this post the other day: what players have won championships in both MLB and NPB? We came up with a couple names off the top of our heads, but I spent some time with both Baseball-Reference and Japan Baseball Daily and I think I've come up with the complete list.

First, here's my criteria: the player had to actual appear in the World Series or Nippon Series to actually count. It's not good enough to simply play for the team during the season they won the championship, or even appear on the post season roster, but not appear in a game.

Iguchi may shortly have a second NBP champion to add to his list. Taguchi was on the Phillies World Series roster in 2008, but did not play.

The one guy I'm on the fence on including is George Vukovich, who was on the Phillies 1980 World Series roster but did not play. He won NPB championships with the Lions in 1986 and 1987. 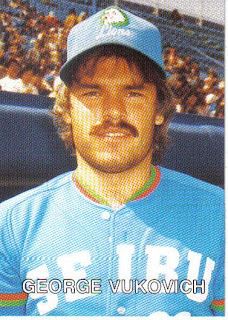 The argument I can think of for Vukovich is that he at least actually played in the Phillies postseason games in 1980? I mean... let's put it this way, I was only 3 years old when the Phillies won that World Series and I remember both Vukoviches being on the team... and I don't think either of them appeared in the WS! (John Vukovich died a few years ago, he was a Phillies coach, it was really sad.) They were only both on the Phillies in 1980-1981, so there had to be some reason they made an impression on a 3-year-old. At least George played in 78 games, it was his rookie season.

But I can also see your argument against including him as well, so it's all good.

Interesting how it's pretty much even between American and Japanese players. I'd have expected it to be slanted heavily on the side of the Americans. But thinking about it a bit more, I supposed it makes sense. All-Star calibre Japanese players are probably a lot more likely to end up on a pennant winning American team than 2nd & 3rd string calibre American players landing on a winning Japanese team.

Deanna - well, I'm betting that you were an atypical three year old...Seriously though, there is a major difference between Vukovich and the Garrett, Jennings and Martinez. To be honest, the only reason I don't include him is the difficulty in determining if someone was on a World Series roster without having played in a game - I don't know if there's anyone else in that situation.

Jason - yeah, I was kind of surprised that it was an even split between Japanese and gaijin too. And I don't think I'd have ever guessed that the first guy to do it was Johnny Logan! When I think of gaijin from the 60's, I'm thinking Kent Hadley, Joe Stanka, Carl Boles - not someone that a casual American fan (from the '60's) might have actually heard of.