I've written in the past about baseball cards for the pro leagues in both Korea and Australia, but I've avoided saying much about cards for the league(s) in Taiwan for a very simple reason - while I have some cards from the CPBL (Chinese Professional Baseball League) - as opposed to the Taiwanese Major League (TML) , a rival league that was eventually absorbed by the CPBL - I know almost nothing about them. I'll show some sample cards and share what I know about them in hopes that maybe somebody can fill in the details.

I think the earliest cards I have are plastic ones. I think they are from the early 90's (the league didn't start until 1989) but I haven't been able to figure it out for sure. Here's one of them - no idea who the player is: 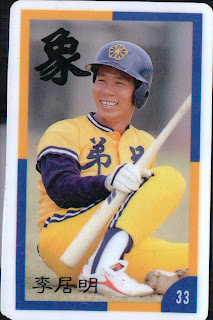 These two cards are from 1996. I think the league published the cards. According to the pack wrapper, the set was called VIP - Very Important Player card. The first card is #111 and I think is Bien Figueroa. The second card is #222 and might be Ron Jones. 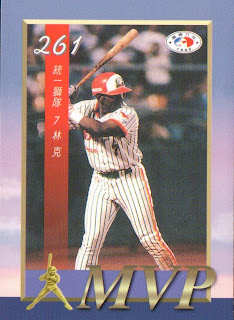 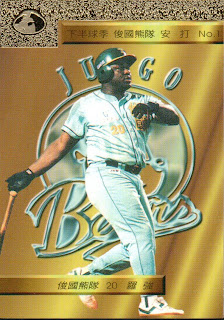 A co-worker went to Taiwan in the spring of 1997 and brought back a pack of the following cards for me. They were made by a company called ProCard (not be confused with the US minor league card dealer). I'm pretty sure that this first card (#102) is Epy Guerrero, Jr. The second card is a Best 9 insert or subset card (#223) of Chung-Yi Huang. 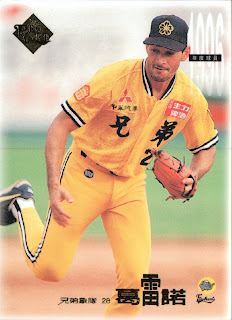 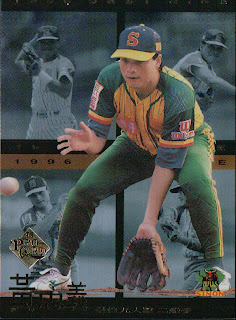 Looks like ProCard also did a high end set in 1997. I got a bunch of these "Topps Finest"/Diamond Heroe-esque cards from eBay a few years ago. The first card is #62, the second is #52 - I have no idea who either player is. 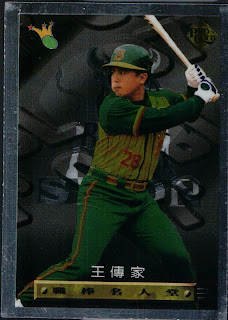 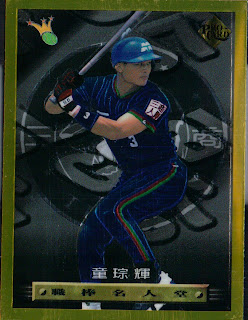 Jason had let me know a couple months ago that the CPBL had produced cards for the league itself in 2009 and 2010. Apparently, they have posted images of the cards on the league's official blog. Now the cards that he's pointed out to me are from a set called "2010 CPBL Player Of The Year". I recently won the cards of a couple former Japanese players from someone on eBay. I think these are from the 2009 CPBL set. Mercifully for the Chinese impaired (like myself), the CPBL put the English names of the players on the cards. The first card is Ryokan Kobayashi (#085) and the second is former Nippon Ham Fighter Tomokazu Iba (#119): 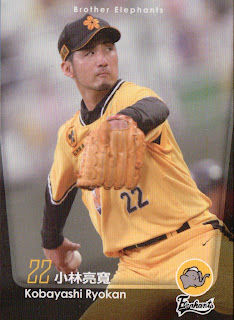 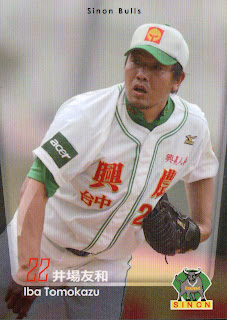 I know that in 1992 The Chinese Baseball Corp. produced a "1992 Sports Collectors Card Album" (the apostrophe was omitted on the album)
The title on the front of the black album in grey letters of differing fonts was Lions Elephants Tigers Dragons.

Today I took it to a Heritage Appraiser who at first told me it was published in Japan--until I pointed out it was Taiwanese. You can be glad to know that this "top" auction house also knows little about the Asian cards.

I have many CPBL baseball cards and memorabilia from 1990-1993. Is there a way to find out the value of them?
I honest think they should worth something.

That is an excellent question. I am not aware of any price guide for Taiwanese cards.

You might try sending an email to Prestige Collectibles and/or Rob Fitts to see what they have to say.

Having found some new resources, I've started compiling checklists for the early 1990s sets. The player at the top of the post is from the 1990 set and is Lee Chu-Ming, one of those for which I actually found an English translation. I'll post all of my progress on by blog (as well as adding the partial checklists to SCF).

I'm working on the 1995/96 VIP set now, to which your cards #111 & #222 belong. #111 is actually Francisco Laureano, and #222 is indeed Ron Jones. Both cards are from the second series of the set. The VIP set contains all of the game/month/season and post-season award winners, as well as the All-Stars. I haven't found a good resource for checklist information yet, so I'm working strictly from auction listings at the moment.

Thanks. I have about a handful of other cards from the set - it'll be nice to finally know who they are.

I have a couple of complete sets of Taiwanese baseball cards from the 1990s.

I see that no one would kmow what they are worth. Too bad.

I'm looking for 2007 CPBL card 162 (Carlos Castillo). If anyone knows how to purchase it, please let me know.