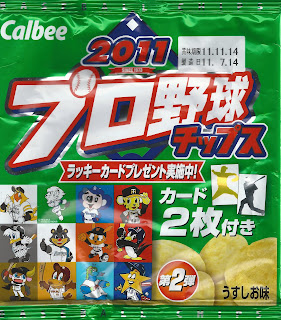 After I was so happy with ordering the Fighters Future Icon set from Rakuten Global Market a few weeks ago, I decided to order a box of Calbee Series 2 from them.  The good news was that the box was about $22.  The bad news was that since the box contained 24 bags of potato chips (each with a pack of two cards attached), it weighed between 3 and 4 pounds, so EMS shipping (the only choice from Rakuten) to the US was over $40!  Yow!  I hadn't realized how bad it would be until I had already placed the order (it isn't entirely clear how much shipping is when you place your order).  I don't think I'll be doing that again.

On the plus side, however, I was very happy with the cards themselves.  I got an amazing 47 unique cards out of the 48 cards in the box.  I got 35 "regular" player cards (plus the double of Tadashi Settsu), 5 "Opening Game" cards, 6 "Star" cards (including a gold signature parallel card for Takahiro Iwamoto) and one checklist card.

The design of the cards is pretty much typical of Calbee over the last 15 years or so - full bleed, borderless fronts with the team name and logo and the player's name (first initial and last name) and number.  It's a design that I admire a lot, along with the photography.  Here's some sample cards:


UPDATE:  Almost forgot - Jason had sent me a link to a store website that shows scans for all the cards in a bunch of this year's sets.  The Calbee Series 2 cards can be found here.
Posted by NPB Card Guy at 9:45 PM