Card Of The Week August 14

I've always liked it when I can identify what game the photo on a particular baseball card was taken at, although I usually have a hard time with Japanese cards.  But this card of Hayato Sakamoto (2011 BBM 1st Version #231) had some major clues - Sakamoto looks pretty happy and there's a pitcher (Hisashi Takeda of the Fighters) who looks like he's walking off the field.  A little searching on NPB's English language website reveals that on June 4 last year, Sakamoto hit a two run sayonora home run off Takeda to lead the Giants to a 7-6 victory. 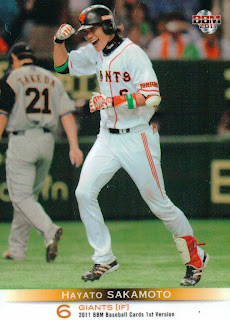 UPDATE:  I should have checked this before, but Deanna was at this game and posted about it.
Posted by NPB Card Guy at 9:48 PM

I was at that game. It sucked.

Sorry to bring up bad memories.