Card Of The Week August 7

OK, quick - what foreign player has gotten the most hits in NPB?

Tuffy Rhodes?  If I had asked this last week, then yes.  But this week, no.

On Friday, Alex Ramirez of the Giants got two hits against the Carp to pass Rhodes as the all time foreign player NPB hit king.  Here's his card from the 2001 BBM Nippon Series set, from Ramirez's first year in Japan when his Swallows defeated Rhodes' Buffaloes (#S22): 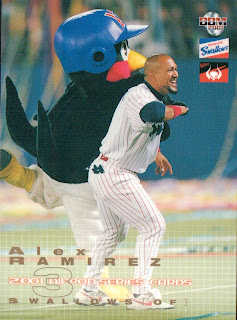 I wonder if he'll hang in there long enough to eclipse Tuffy's home run record? He'd just have to stay healthy and not be too offended by the team's inevitable reduced contract offerings as he gets older (regardless of production).