Card Of The Week February 12

Just finished reading Rob Fitts' new book "Banzai Babe Ruth" (which was released in late January instead of the previously announced data of March 1st).  Very interesting book - I read it in less than a week (which is quick for me) as it was difficult to put down.

One of the many tidbits that I learned while reading the book was about Victor Starrfin, one of the more interesting guys in NBP history.  Starrfin was born in Russia in 1916 and his father was an officer in the czar's Imperial Guard.  After fighting on the losing side of the Russian Revolution, the Starrfin family eventually escaped from Russia to Hokkaido.  Once settled in Japan, Starffin began playing baseball in school and by the time of the 1934 US tour he was one of the top high school players in the country.

Because the Japanese team had been unable to defeat the American team during the tour there was mounting pressure on the tour's organizers to recruit Starffin for the team.  Since the Department Of Education had decreed that any amateur player who played in games against professionals would then be ineligible to play in high school or college, Starrfin's joining the team would make him give up his dreams of leading his team to Koshien in 1935 and then playing for Waseda.  So understandably, he decided to decline the invitation to join.

The organizers reacted by sending a gangster to Hokkaido to look for Starffin (ostensibly to attempt to buy his agreement).  Fans of his school team ended up hiding the family from the gangster.  What finally worked, however, was that the organizers used influence in the government to begin the deportation process for Starrfin's father who was in prison for murdering his mistress.  Since the deportation would be a death sentence for his father, Victor finally agreed to join the All Nippon team.

The postscript to this story is that after all this trouble to get Starffin to join the team - threatening his father's life and forcing him to give up his future plans, Starffin only appeared in one game in the tour - in Omiya on November 29, 1934.  He pitched one inning, striking out one and walking two.

Starrin would go on to an outstanding career in professional baseball in Japan, becoming the first pitcher to reach 300 wins in a career that would last until 1955.   Here's a card of him from the 2004 BBM Golden Arms set (#001), showing him in the uniform of a somewhat obscure team called Pacific in 1946 - this team would become the Robins in 1947 and eventually merge with the Whales in 1952: 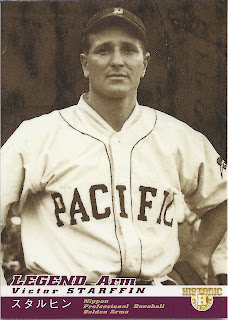