One of my all time favorite movies is The Big Lebowski.  There's a scene in the movie where The Dude (Jeff Bridges) is wearing a shirt showing a baseball player along with a couple Japanese characters.  Jeff Bridges apparently really likes this shirt as he's worn it in a least two other movies: 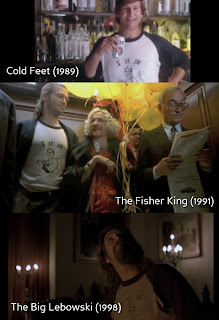 The baseball player in question is Kaoru Betto, "The Gentleman Of Baseball".  Betto played for the Osaka Tigers (1948-49) and Mainichi Orions (1950-57) and was one of the first power hitters in Japan.  He managed the Orions for a number of years in the 50's (including while he was still playing) and later managed the Buffaloes, the Carp and the Whales.  (He also attended Keio University from 1940-46, spending some time in the Navy during the war.)  Here's a couple cards from his career:


I think that the characters on the shirt translate to something like "Strongly Influential" but I'm just getting that from looking around on the web.  What I'd really like to know is - what's the deal with the shirt originally?  Why did someone somewhere originally decide to put a picture of Betto on a shirt?
Posted by NPB Card Guy at 6:00 AM

I saw that t-shirt at the flea market once and should have bought it.