Card Of The Week February 26

Former Lion GG Satoh has signed to play in Italy this year with Fortitudo Bologna.  (I'm a little amused at the fact that the article on the team's website shows a card of him from the 2008 Seibu 30th Anniversary set - hmm, wonder where they got the scan from?)  It's been a bit of a decline for Sato the past few years.  He was the #1 Vote Getter for the 2008 All Star games, but after a very productive three season from 2007-09, he only appeared in 53 games for the ichi-gun Lions in 2010 and didn't make an appearance at all with the big team in 2011. 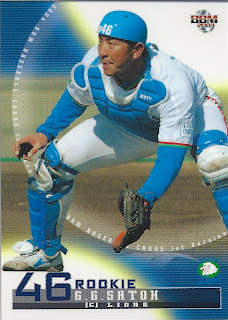 Oddly enough, despite being his Japanese rookie card, this isn't the first card he ever had.  It turns out that he signed with the Phillies out of college and spent 2001-03 in their minor league system.  He appears in the 2001 and 2002 Batavia Muck Dogs sets and the 2003 Lakewood Blue Claws set.  I don't have any of these sets (I stopped collecting minor league sets after 2001) but I was able to find a scan of one of his cards (2002) from an auction on eBay: 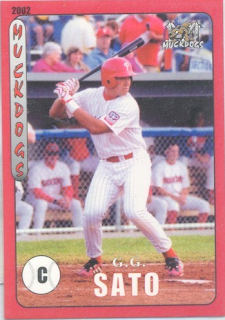 As it turns out, Satoh was not the first former NPB player to suit up for Fortitudo Bologna. In 2002, Ayahito Shinada, formerly of the Kintetsu Buffaloes, also played for the team and even had a baseball card. I just discovered cards were issued for the 2002 and 2003 Italian Baseball League seasons. I'm trying to figure out a way to track some down.