Card Of The Week February 5

Ebbets Field Flannels this week unveiled a couple of new hat and t-shirt designs related to NBP teams.  There's a 1940 Tokyo Giants hat, a 1966 Sankei Atoms hat and a 1963 Taiyo Whales t-shirt.  I thought this week I'd show someone wearing the logo that's on the Whales t-shirt - Haruyasu Nakajima from the 2006 BBM Nostalgic Baseball set (#058): 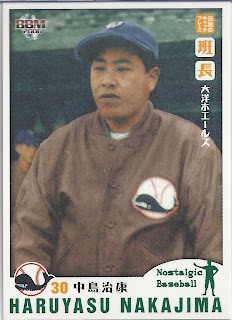 Does anyone know what the symbol on the sleeve of the Whales t-shirt is?  I had wondered if it somehow indicated something about Kawasaki because they stopped having the symbol on the uniform when they moved to Yokohama in 1978, but it was on pre-1955 uniforms as well and I don't think the Whales were in Kawasaki prior to 1955.
Posted by NPB Card Guy at 5:03 PM

Finally made it in to the Ebbets Field Flannels store today. They're only open weekdays, so stopped by on lunch after going to city hall. Looked like they had almost everything available that's on the website, a ton of hats. The guy there said they are making the Whales' uniforms now. I suggested some Chunichi stuff and he said that they had been discussing it, so looks like more cool NPB gear on the way.

Cool. I've always wanted a Dragons jersey from the late 60's/early 70's. Maybe they'll be doing that one.