I had ordered a box of the new KBO Super Star Baseball set from someone in Korea on Ebay.  I paid for the cards on the sixth but the seller didn't send the cards until the tenth.  The post office attempted to deliver them on Monday when no one was home so it wasn't until yesterday that I actually got my hands on them which means it took less than two weeks to get the cards.

Again like the first set, the box contains 20 packs of six cards each so there's 120 cards in the box.  Here's how my box broke down:

With the exception of the two duplicate All Star parallels, I was pretty happy with how this box turned out.  While I'm still roughly 50 cards short of a complete set, I didn't feel like I was inundated with duplicate cards like I did with the two boxes I opened from the first set.

The cards are not numbered in continuation of the first set.  They are numbered 1-126.  However, the full card number has an "SBC02" prefix while cards in the original set had an "SBC01" prefix.  There are no players who appear in both sets.

The base cards are nearly identical in design to the first set.  The only differences that I see are that the little box with an arrow head pointing up or down in the lower left side of the First Series cards has been replaced with a holographic square in the Second Series and there's a border on the right side of the photo on the Second Series card while the photo went all the way to the right edge of the card in the First Series.  Here's some examples:


I'm amused that at least one of the Doosan Bears players was depicted in a "turn-back-the-clock" uniform.

The backs of all the base cards are identical.  Like Series One, the cards all appear to be designed to be used in some sort of collectible card game, similar to the Konami "Field Of Nine" cards in Japan in 2000 and 2001.  Actually, the backs are identical to the backs of the first set:

You've probably already noticed that the "Big Star" cards are the only ones with the player's name in English on the front.  The backs of all the parallel cards have the same design which contains the player's name in English as well.  Interestingly, the backs of the parallels have an identical design to the All Star short print cards from the First Series.

In addition to the six cards, each pack contained some sort of "item" card.  All the ones I got had some sort of on-line code to be used somehow, possibly in the EA Sports MVP Baseball Online game.  There are possible autograph and memorabilia cards associated with the set but I don't know if they actually are included in boxes or if you have to pull a redemption card of some sort for them. 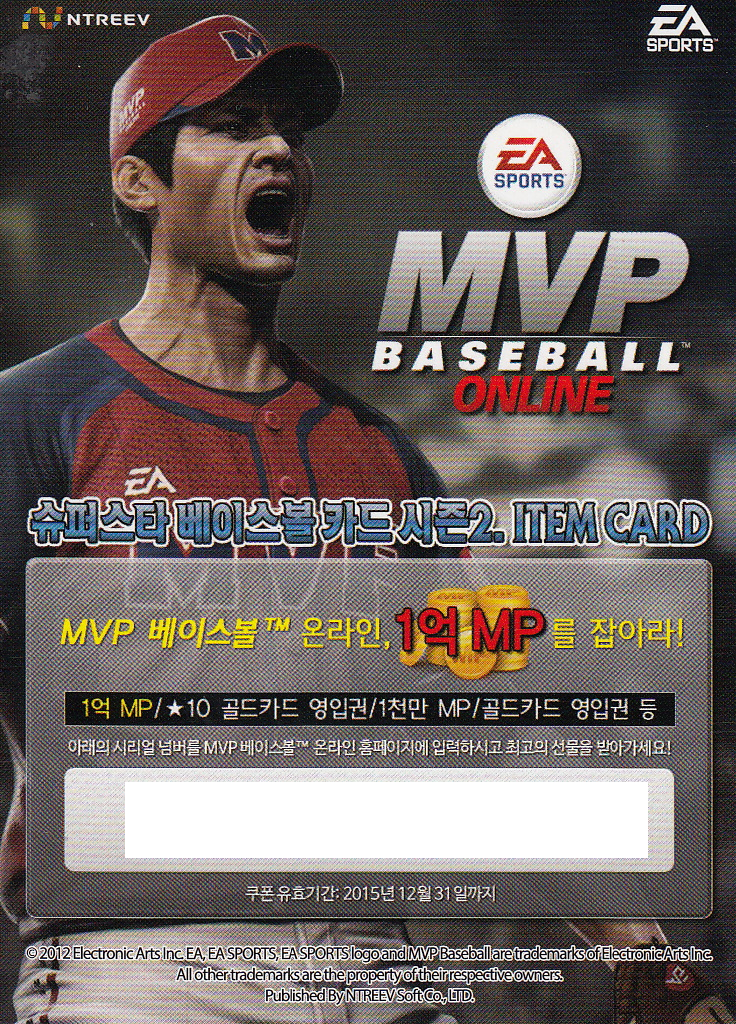 It'll be interesting to see if Super Star does a third set, given that the KBO's season is just about over.  It would be nice to see one with some foreign players.

Thanks to Jason for adding this set (and many others) to the Inventory Manager over at SportsCardForum.com.
Posted by NPB Card Guy at 9:28 PM

Interesting set. Different how Series 2 didn't follow Series 1 and went with the parallels instead of SPs.

The pitching motion of Dae-Hun Jeong must be something to behold live!

Jun Heo has a cracked bat!

I think Series 2 might be better off being defined as 2nd Version or Version 2, similar to BBM. However, they do completely unique designs for each version, and they are still sequentially numbered. Perhaps they want it defined as "2014 Season 2" instead of "Series 2" given the text on the box.

Regardless, I think I like this issue a little better than the first. The parallels are really nice looking! The card numbering system reminds me of some sets here in Japan, which you've probably noticed (Future Bee and some of the gaming cards for example)

The checklist for the set is over at the Trading Card Database. I do not know of a price guide for Korean cards. You might ask Dan Skrezyna about it.