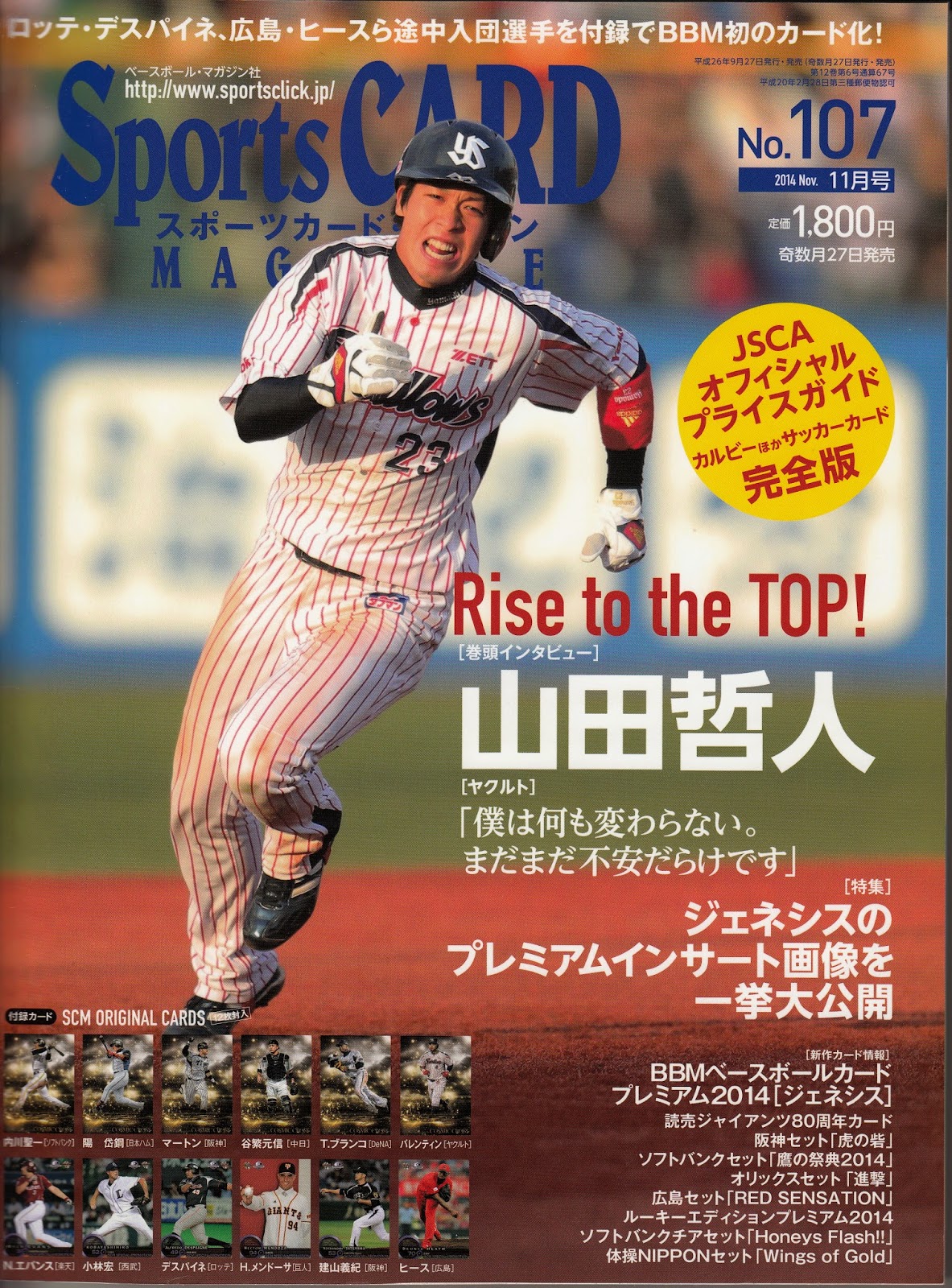 Once again, the latest issue of Sports Card Magazine (#107) has hit the street and once again through the magic of Amazon Japan and DHL shipping, I have my copy just a few days after it was in stores.

I have to say that this isn't a great issue for the Japanese-language impaired like myself.  The cover story is on Tetsuto Yamada of the Swallows and features a selection of his BBM cards.  The full color "New Card Information" section features six pages(!) of coverage for the new Genesis set - lots of examples of the various memorabilia and autograph cards.  There is also coverage of a number of other new BBM sets, many of which have already been released (Tigers Fielding, Celebration Of The Hawks, Buffaloes March, Red Sensation and Honeys Flash).  There is an almost full page ad for the upcoming Giants 80th Anniversary set as well as an article in the "newsprint" section of the magazine about the set.  From looking at the pictures in the article, I feel comfortable in saying that Wally Yonamine will be in the set, but I'm less sure about Masaichi Kaneda or Hiromitsu Ochiai.  (For the sake of comparison, Ochiai was in the 70th Anniversary set but Yonamine and Kaneda weren't.)

As always there are checklists for the latest issues, and price guides for the 2014 cards.  SCM features vintage checklists on a rotating basis - this issue has soccer cards.

For the other six, SCM decided to repeat what they had done in the last issue and printed six bonus 2nd Version set cards for players who were late signing.  And when I say, late signing, I really mean it.  The deadline for adding players for the season is July 31 of each year.  Five of the six players signed after July 21 this year.  Two of the six players are Japanese players returning to NPB -Yoshinori Tateyama pitched in the Yankees organization the first part of this season before signing with the Tigers (after previously having played for the Fighters) and Hiroyuki Kobayashi signed with the Lions after spending much of the past two seasons in the independent Baseball Challenge League (he previous played for the Marines and Tigers).  The other four are foreign players coming to NPB for the first time and I'm very excited about two of them - Cuban players Alfredo Despaigne (Marines) and Hector Mendoza (Giants).  The other two are Nick Evans (Eagles) and Deunte Heath (Carp).  I'm fairly confident that these will be the only cards of these players done this season.

Here's a look at the six bonus 2nd Version cards:

I think that deep red uniform looks out of place on a baseball field...

Heh, I saw that magazine last week at the stores, but didn't even think about it beyond "hey, Tetsuto's on the cover". I barely bought any cards this year though, so I guess it figures.