Card Of The Week September 7

Obviously Yamamoto has been around forever.  He was taken in the fifth round of the 1984 draft (held in November of 1983) by the Dragons.  It looks like his first Japanese card is from the 1989 Takara Dragons set.  His first Calbee card was #64 from the 1990 Calbee set and his first BBM card was #67 in their inaugural set in 1991.  Yamamoto is one of only two players (Motonobu Tanishige being the other) who has appeared in at least one of BBM's flagship sets every year that BBM has done cards (1991-present).

I don't have his 1989 Takara card but I do have his 1990 one.  As this was during Takara's "mug shot" era (until 1991 the pictures on all of Takara's cards were essentially head shots), there probably isn't a whole lot of difference between the two cards: 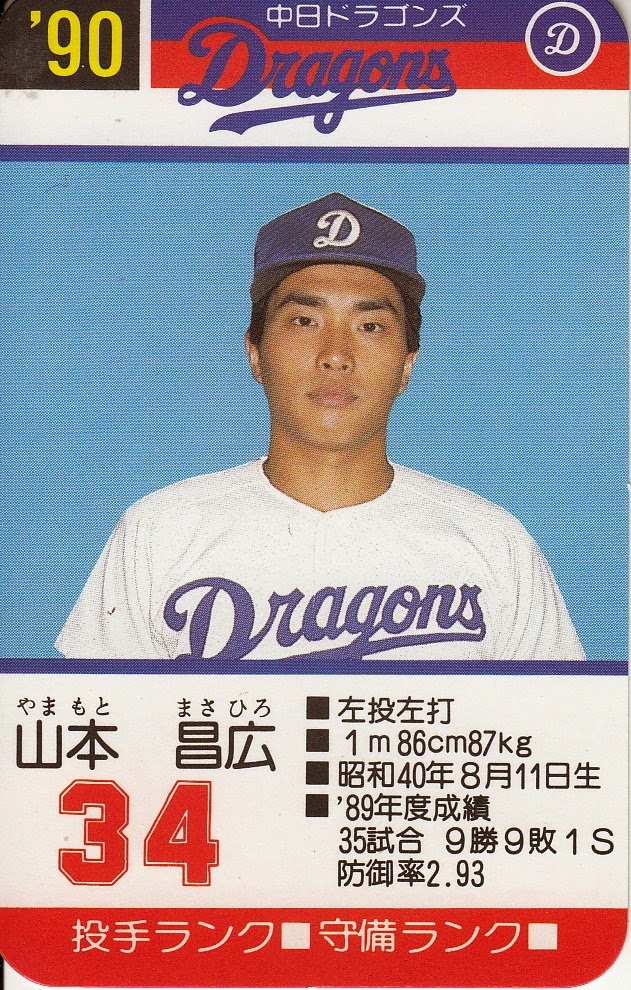 The records that Yamamoto broke were all set by Hall Of Famer Shinji Hamazaki.  Hamazaki had a very odd career.  After a fairly long career in the industrial leagues, he joined the Hankyu Braves in 1947 (at age 45) and became their player manager.  He managed the team until 1953, still pitching for them in 1948 and 1950.  He also managed the Takahashi/Tombo Unions in 1954 and 1955 and the Kokutetsu Swallows in 1963.  He was reportedly one of the shortest players ever, standing only 5' 1.5".

While he appeared on a handful of menko and bromide cards while he was active, Hamazaki does not appear to have any modern cards.  He's not in any of the logical BBM sets that he could have appeared in - 2006 Nostalgic Baseball, 2009 Hankyu Memorial or the 2011 Legend Of The Tokyo Big Six (he attended Keio University in the 20's).  He ranks up there with Shigeru Makino as one of the toughest Japanese Hall Of Famers to get a card of.
Posted by NPB Card Guy at 11:23 AM

Hmm, just fixed three or four. Did I get them all?

Can't blame the painkillers. Just being sloppy as usual.

I watched the game on TV, it was impressive that he not only won it but pitched 5 shutout innings in the process, it was a really solid start. Also, coincidentally of course, he was being managed (and I think caught) by Tanishige, as you point out the only other guy with cards in every BBM set. This will probably be the last season for both of those guys, so it is going to be the end of an era.

Very interesting that he had an American card before a Japanese one too.