I've picked up some more menko cards in the past few months that appear to not be cataloged in Gary Engel's "Japanese Baseball Cards Checklist And Price Guide".*

*I do need to mention that Gary Engel took a look at some of the cards I've posted and confirmed that the Shigeru Fujio card I have is a previously unknown card from the 1961 Marumatsu JCM 14d set.

UPDATE - I received an email from Gary Engel today (12/14) with his comments on the cards.  I'll add them to each of the paragraphs below.  One thing that Gary did stress with me was the distinction between unknown cards and uncataloged cards.  Just because a card is uncataloged doesn't mean it's unknown.

The first card is familiar looking but I still don't know what set it belongs in.  It's a card of Kaoru Bettoh and it's pretty obviously a Kagome card from the same set as the Fumio Fujimura card I mentioned last summer.  But neither card resemble any of the Kagome sets listed in the most recent edition of Engel.  (Engel: Not in Guide.  I have a copy of this card, too.  And, I've seen it several times.  I suspect it is from a set that is mostly non-baseball, but I have no proof.  (just a hunch))

I suspect that the next card should properly be classified as a bromide card, although I think it's from one of the sets that Engel refers to as links between bromides and the "tobacco" menkos of the late 50's and early 60's.  The player is Noburo Inoue of the Dragons.  Initially I was thinking that the card might be from the 1957 JBR 18 set, but the text doesn't really match (the size of the text of team name is roughly the same as the size of the player's name on the card whereas in the JBR 18 set the size of team name is smaller) and the JBR 18 cards feature stadium backgrounds.  The card is blank backed except for a "3" in a circle that is probably indicates that it was a "winner" card.  (Engel: There are a number of bromide sets which look like "tobacco menko" on the front but have blank backs.  I just keep a visual catalog of everything of this nature that I can find until I can find a taba, display sheet, or uncut sheet of a particular type which will allow me to catalogue each set.  I have not seen this particular card before.) 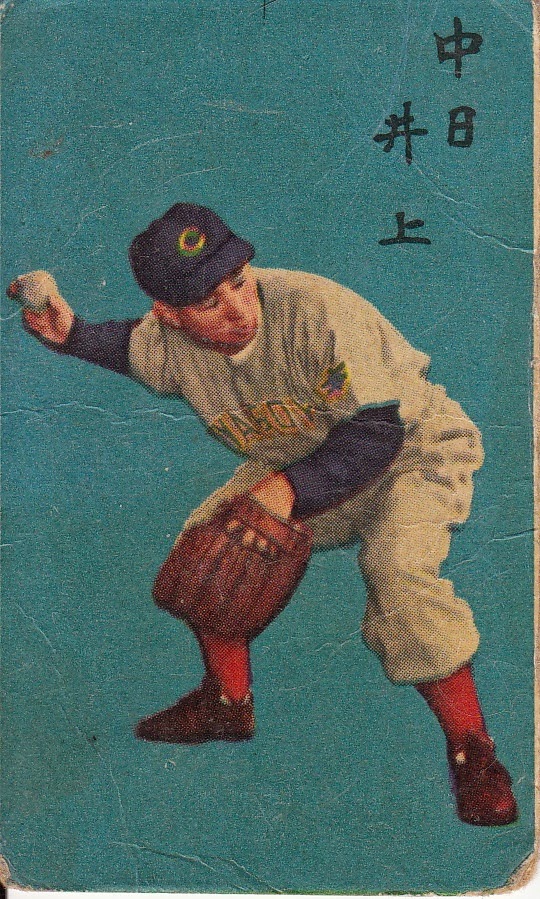 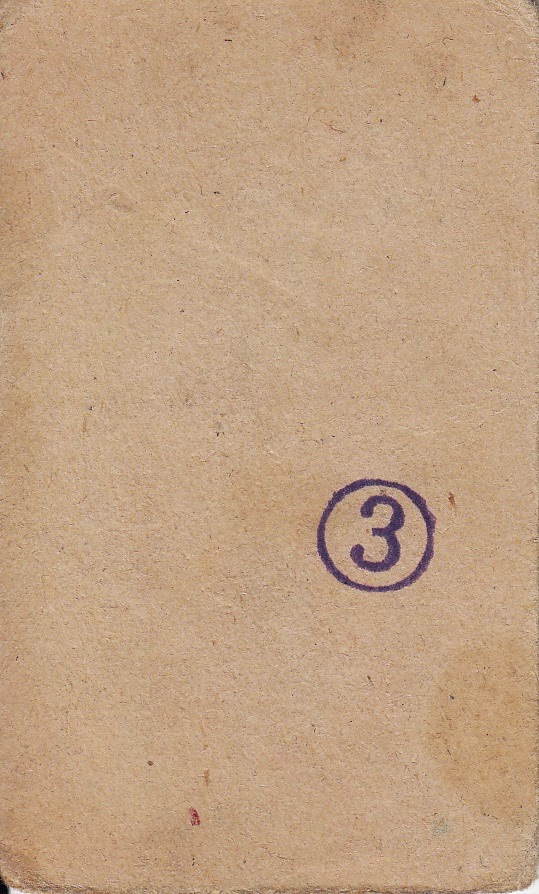 I'm pretty sure I know which sets that the rest of the cards I'm posting tonight belong in.  This card of Tadao Wako of the Lions  appears to be from the 1959 Marusho JCM 38b set.  That particular set featured only cards of the Giants and Lions, the participants in the 1958 Nippon Series.  (Engel: This is indeed a 1959 JCM 38b card.  Subsequent to the last Guide edition, I have obtained tabas and display sheets of this set.  It is now complete at 40 cards.  One of the two "new" cards that I discovered is this one of Wako.) 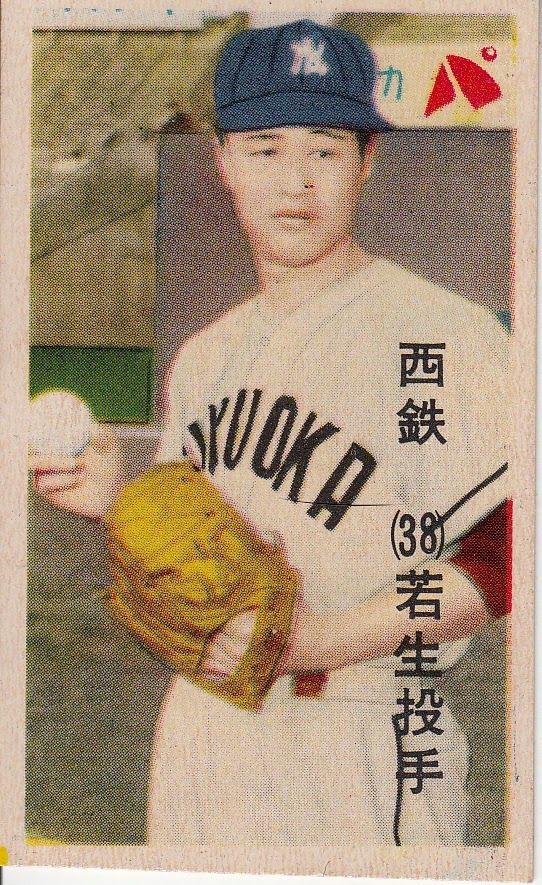 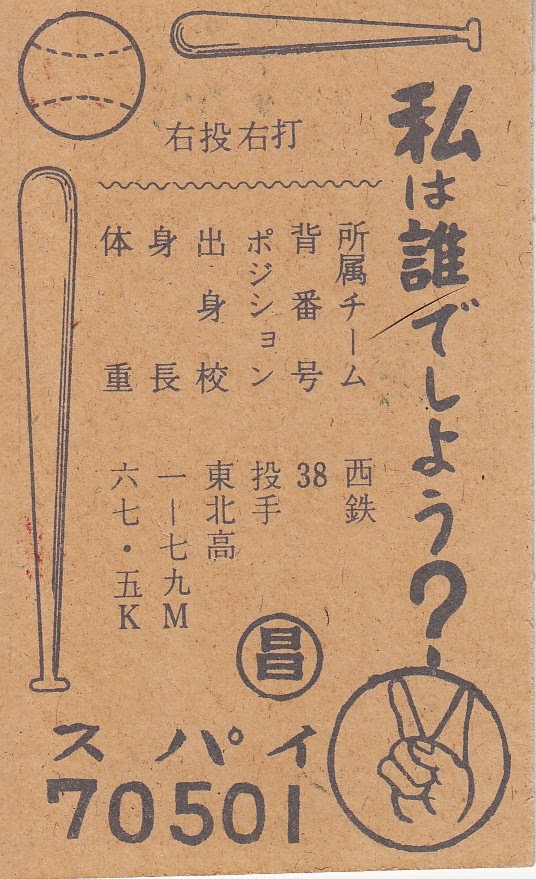 These next two cards are also from 1959 - I think they are both from the Maruta JCM 40 set.  The card with only one player on it features Shoichi Ono of the Daimai Orions.  The two player card features Tadashi Sugiura and Tamotsu Kimura of the Nankai Hawks. (Engel: Ono-Definitely a previously uncatalogued member of the JCM 40 set.  Sugiura/Kimura - This card is an already catalogued JCM 40.  It pictures Nomura with Sugiura instead of Kimura.  In fact, the first character for Kimura on your card looks like it was done in a different font.  Was it done by hand?  NPB Card Guy:  The "Ki" kanji does not appear to have been written on the card after printing as there is no depression in the surface of the card that a pencil or pen might have made) 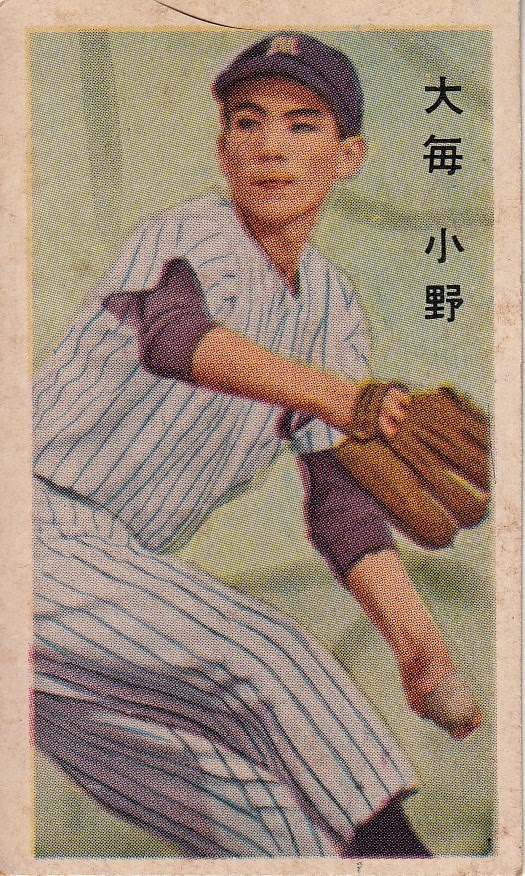 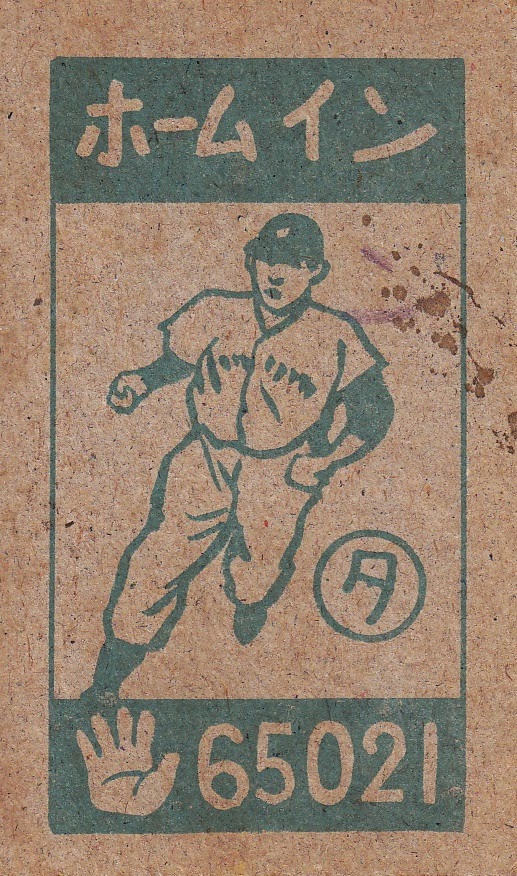 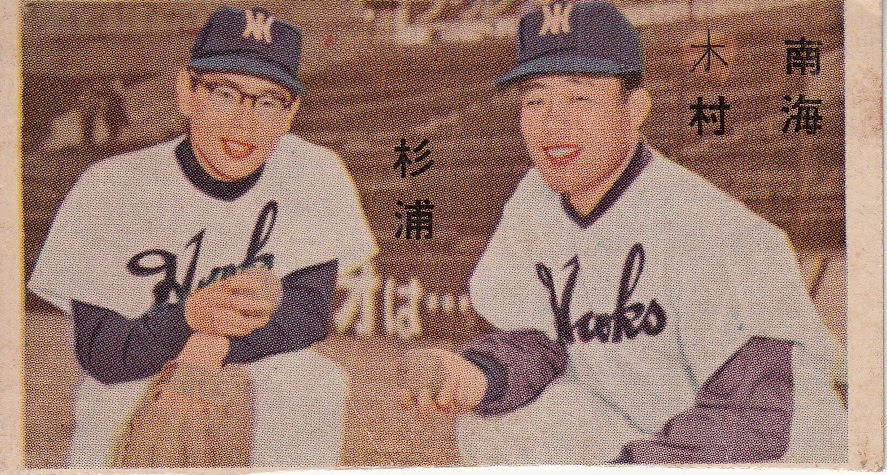 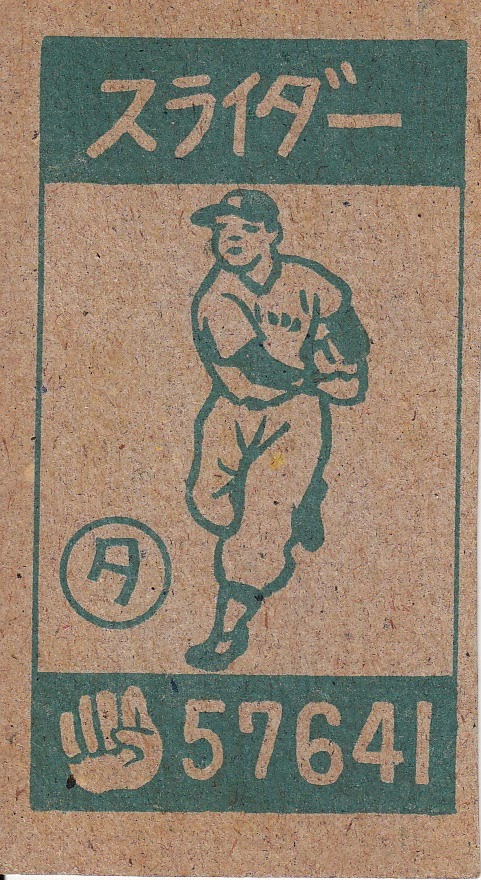 This card of the Dragons' Toru Mori looks very similar to the cards in the 1959 Maruten JCM 135 set.  There's a couple major differences, however, as the cards in that set are assumed to be part of a sequence of pictures for each player in the set, so each card is marked with a sequence number.  The text on the back of the JCM 135 cards is horizontal while the text on the back of this card is vertical. (Engel: This is already catalogued in JCM 135.  It is sequential card number six for Mori, as the Japanese character for the number six is the bottom character within the black text box.) 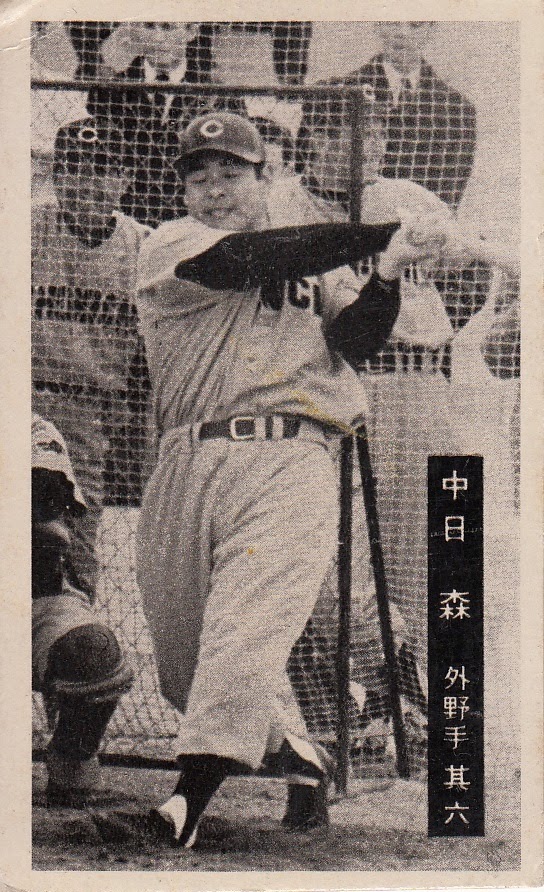 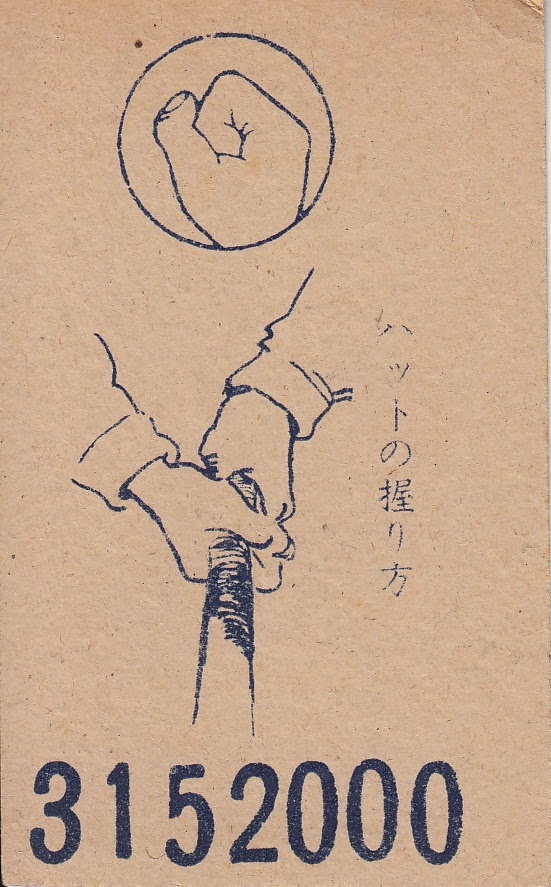 This card of Toshio Miyamoto (UPDATE - just realized that this is nisei player Andy Miyamoto) of the Giants appears to be from the 1959 (again with the 1959!) Maruten JCM 136 set. (Engel: Yes, this is indeed a previously uncatalogued JCM 136.) 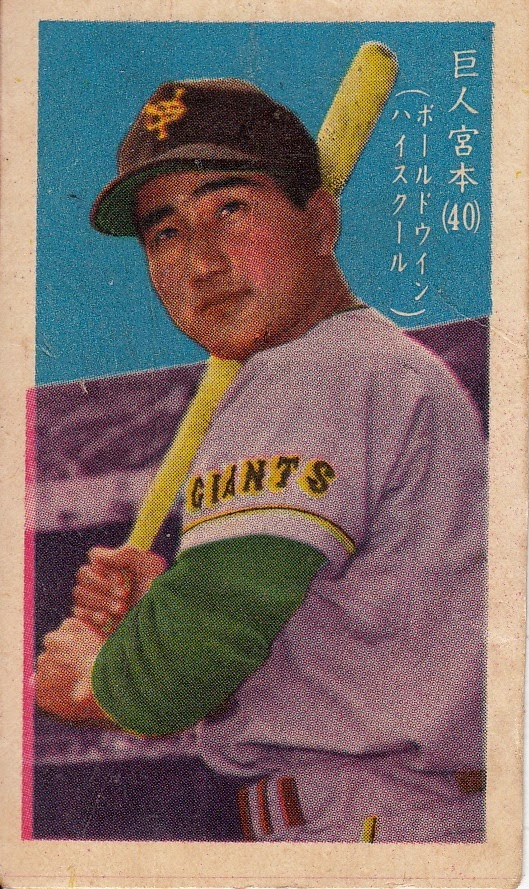 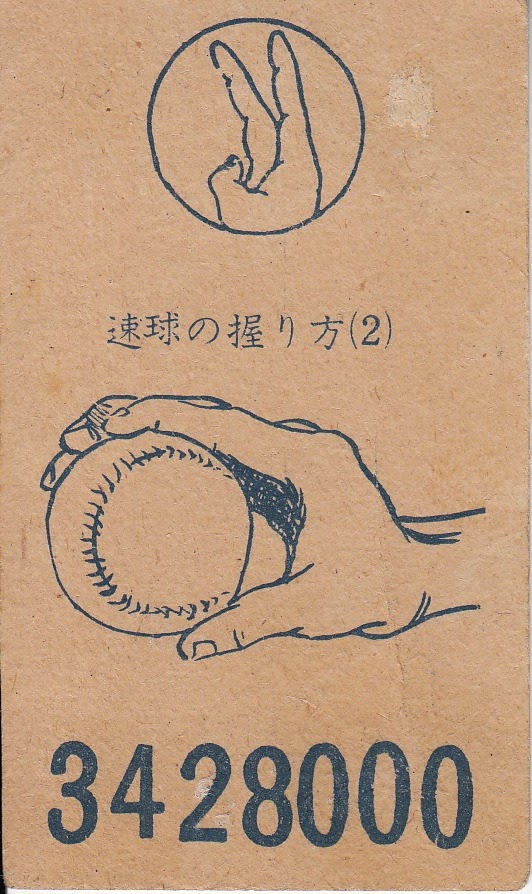 The final two cards appear to be from the 1961 Marukami JCM 14d set that I previously had found the new Fujio card for.  The first card is Takao Katsuragi of the Orions and the second card is Takeshi Kuwata of the Whales.  (Engel:  Several months ago, Rob Fitts was looking through his collection of JCM 14d and discovered that it either has two printings, or there are two very similar sets.  I had never collected this set, and much of my checklist relied on info given to me by Paul Margiott over 20 years ago, when we were putting together the first edition.

Rob doesn't have a complete set, but noticed that there were two versions of many cards in the set, each having a different menko number.  In all cases of cards with two versions, one was printed more crudely than the other, and that there are color variations between the two versions.  In many cases, where the guide checklist had two cards listed for a player, the two menko numbers simply indicated the two versions (I didn't know that), although there are some players who do have two cards with different images within the same version.

At present, we know of 72 cards from the two versions, as opposed to the 58 cards I had checklisted in the guide.  And a second version of the majority of cards is still unknown.  Rob had the Kuwata card.  The Katsuragi card is unknown to me.) 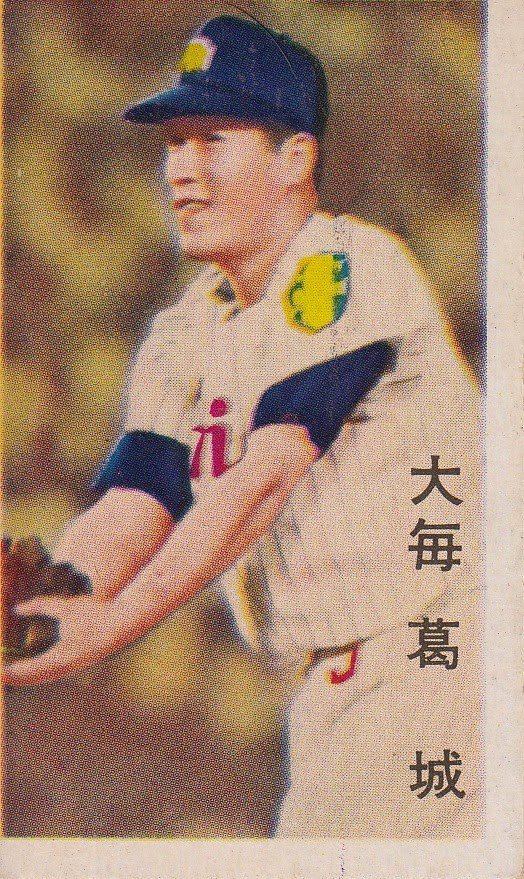 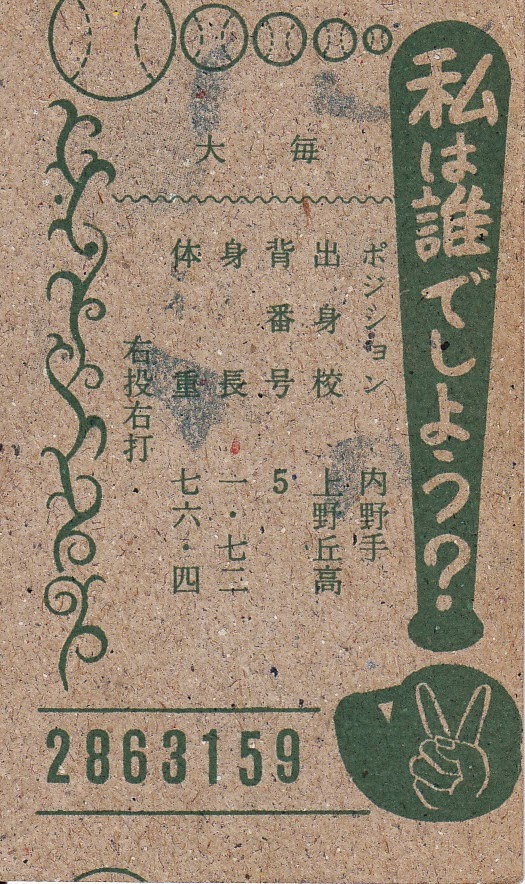 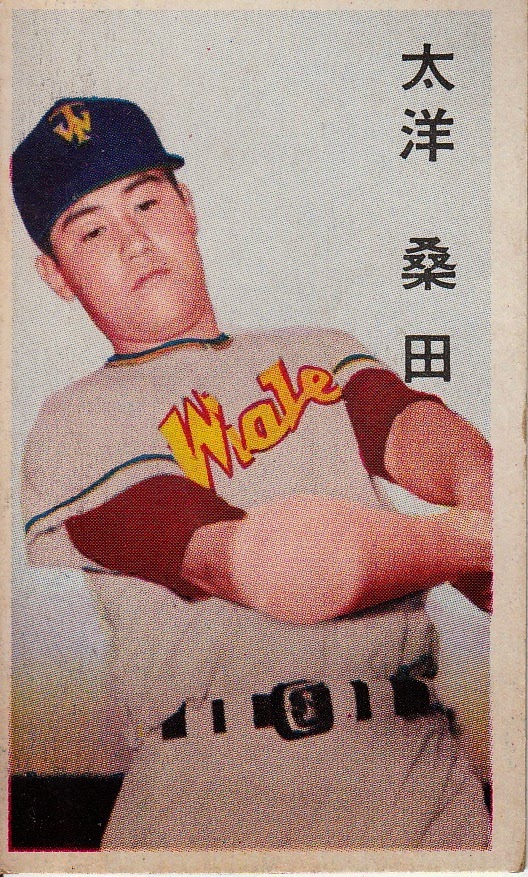 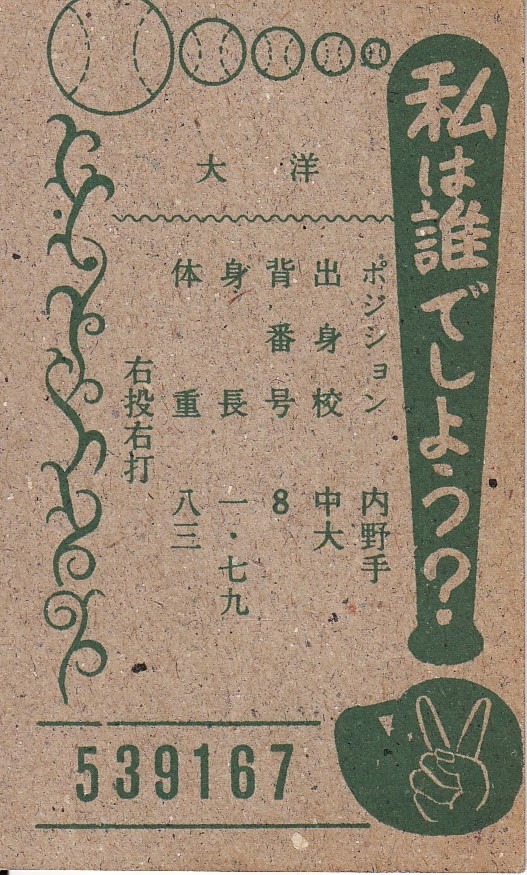 If anyone can shed any light on these cards (or point out where I missed them in Engel), please let me know.
Posted by NPB Card Guy at 10:32 PM