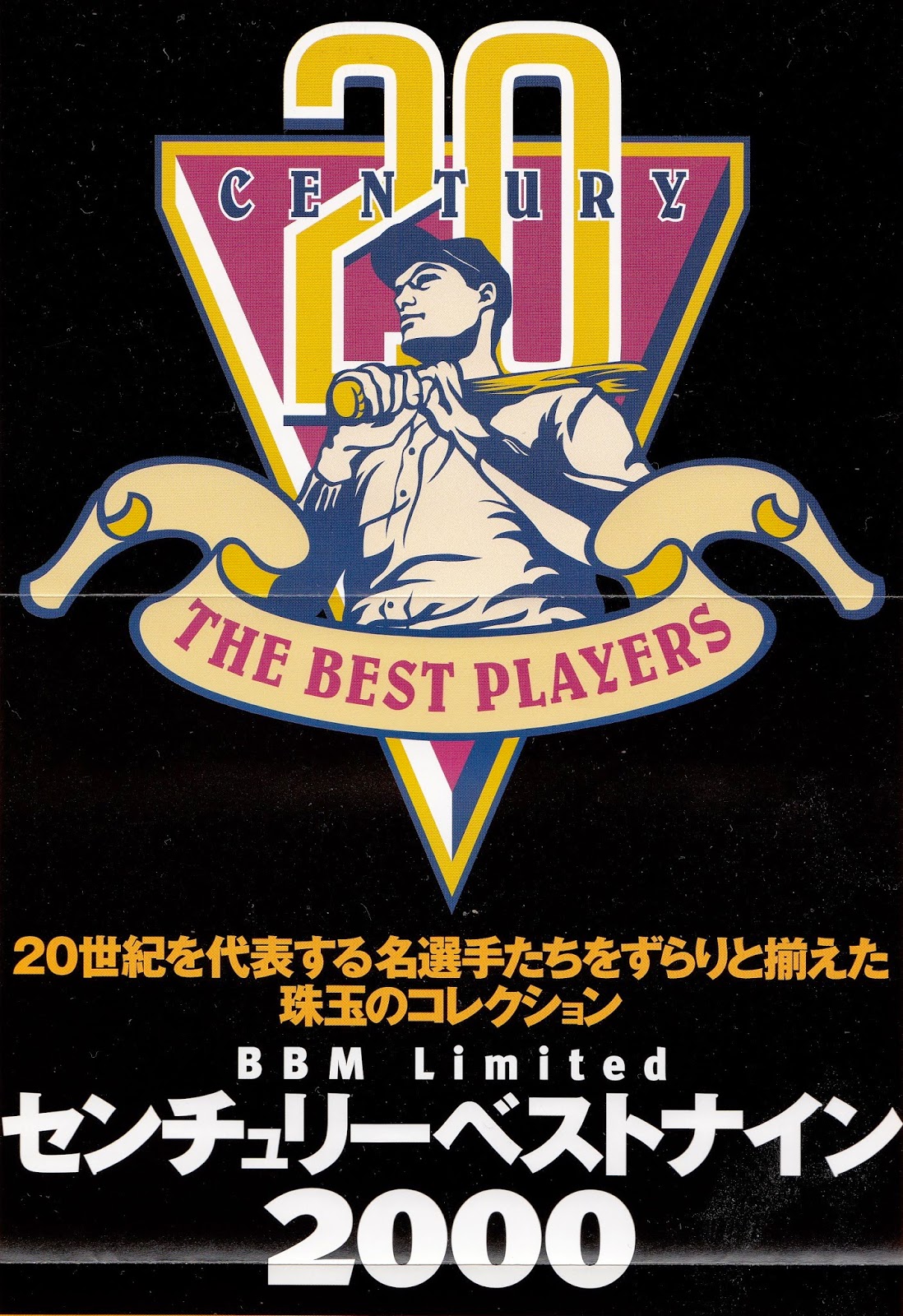 I started seriously collecting Japanese baseball cards in the fall of 2000.  One of my first sources for cards was the online store YakyuShop.com (which has been gone now for a number of years).  I used to buy a lot of unopened packs from them, especially packs from a set BBM had just released that fall - the 20th Century Best 9 set*.  I decided early on that I would attempt to complete this set.  Not only that, I wouldn't be satisfied with the base set, I wanted the master set, or at least the base set plus the two insert sets.

*I'm actually not positive what this set should be called.  Engel refers to it as the "20th Century Best 9" set so that's what I'm calling it here.  But those words don't appear on the packaging at all (at least not in English).  I've got the set in my database simply as "20th Century" and the packaging implies that the set is called "20th Century - The Best Players".

Little did I realize that the set was going to take me 14 years to complete!  Actually, I don't know how long it will take me to complete because I'm still short one insert card.  But with the help of Ryan (the most recent in a line of several people who have helped me out), I have finally completed the base set (to go along with an insert set I had completed a few years back via my first ever order with kuboTEN).  So I think it is finally time to do a post about this set, which is probably my favorite historic set ever.

According to Engel, in 2000 someone (probably NPB itself) had a fan vote to determine the Best 9 team for the 20th Century (similar to the MLB All Century Team although the NPB team would feature only one player per position).  BBM released this set in conjunction with the vote featuring (I assume) all 120 players on the ballot.  But BBM did not do a simple 120 card set - each player on the ballot would have four cards in the set for a whopping 480 card set!  In fact, the base set contains 484 cards as there are four unnumbered checklist cards as well.

The 120 players featured in the set are an amazing collection of the greatest players in NPB up to 2000.  The big names that you would expect are all in the set - Oh, Nagashima, Katsuya Nomura, Masaichi Kaneda (kind of - more about that in a minute), Sachio Kinugasa, Tetsuharu Kawakami, Tsutomu Wakamatsu, Kazuhisa Inao, Isao Harimoto, Koji Yamamoto, Hiromitsu Kadota, Yutaka Enatsu and Hiromitsu Ochiai.  There are a large number of players from before 1950, including players who played both pre-war and during the war, guys like Eiji Sawamura, Masaru Kageura (first cards ever for Kageura I think), Victor Starffin, Jiro Noguchi and Tadashi "Bozo" Wakabayashi.  Foreign players are well represented including Wally Yonamine, Warren Cromartie (kind of), Leron Lee, Ralph Bryant and Boomer Wells.  Harris McGalliard (real name was Andrew McGalliard and he played in Japan under the name "Bucky Harris"), an American who played a for a couple teams for a few years in the 1930's (he was MVP of the 1937 Fall season), is included in the set - I think these are the only four baseball cards of him ever made.  There's also a large number of players who were active in 2000 (including two that were still active in 2014) in the set - Ichiro, Hideki Matsui, Kazuo Matsui, Kazuhiro Kiyohara, Koji Yamamoto, Akira Etoh, Hiroki Kokubo, Tuffy Rhodes, Bobby Rose and Tsutomu Itoh among others.  Two other players who were active in MLB in 2000 are included in the set - Hideo Nomo (kind of) and Kazuhiro Sasaki.


The photography on the front of the cards is a somewhat mixed bag in terms of quality.  Obviously the longer ago a player was active, the less likely there is of finding any color photos of the player.  And of course a lot of photos didn't survive the war.  On the plus side, BBM did a remarkable job in finding photos of players for some pretty obscure teams from 1930's and 1940's - the Eagles, Yamato, the Tokyo Senators as well as photos of players during the war (distinguishable by the fact that there's no English on the uniforms).

Here's a bunch of example cards:


I mentioned above that Masaichi Kaneda, Warren Cromartie and Hideo Nomo were "kind of" in the set.  All three of them have cards, but BBM was not able to actually get the rights to use their pictures in the set.  So 12 of the cards look something like this:

Prestige Collectibles had an uncut sheet of cards from this set up for auction a few years back - I think it was actually a proof sheet for the set.  It actually included a Kaneda card with a picture on it.  Unfortunately it was priced waaaay out of my price range.

48 of the cards in the set (all featuring black and white photos) had a parallel version.  The parallel cards featured a sepia toned photo and a gold embossed bar in place of the black bar on the bottom of the front of the card.  The backs were also sepia toned rather than the original colors.

There were two insert sets issued with the set.  The first is a 15 card "Combination" set featuring shots of two players together.  Like the base set, some of the cards are black and white and some are color.  Here's a couple examples:

The other insert set is called "The Scene" and it features eight significant moments in Japanese baseball history up to that point - Yutaka Enatsu striking out nine PL batters in one of the 1971 All Star games (in which the Central League had a combined no hitter against the Pacific League), Shigeo Nagashima's retirement in 1974, Sadaharu Oh passing Henry Aaron in 1977 (the one card I still don't have), Isao Harimoto reaching 3000 hits in 1980, Keishi Suzuki getting his 300th win in 1984, Yutaka Fukumoto getting his 1000th stolen base in 1984, Sachio Kinugasa's consecutive game streak passing Lou Gehrig's in 1987 and Ichiro becoming the first player to get 200 hits in an NPB season in 1994.

There was also a group of cards that were available as a mail-in lottery.  200 cards were produced for each player who was actually named to the 20th Century Best 9 team.  It appears according to Engel that these were essentially the same in appearance as the sepia parallels although the photos were all in color.  There were also autograph cards available on a redemption basis - five players (Yutaka Enatsu, Kazuhisa Inao, Tetsuharu Kawakami, Yasimitsu Toyoda and Koji Yamamoto) each signed 40 cards.

I want to thank everyone who has helped me put this set together over the years - YakyuShop, Rob Fitts, Jason, Sean, Ryan and Mint Ikebukuro.  I also used Gary Engel's "Japanese Baseball Cards Checklist And Price Guide" in writing this post.
Posted by NPB Card Guy at 10:57 PM

Hey, congratulations on finishing that 14 year quest! I think it makes for a much more fulfilling collecting experience when it takes that long to complete a set.

Good luck with hunting down that final insert too!

Hi Sir. I have this kind of cards.

I'm all done with this set but thanks!