Card Of The Week December 6

Today is December 7 which of course is the anniversary of the Japanese attack on Pearl Harbor.  I was surprised a few years ago (although I don't know why it hadn't occurred to me that it was likely) to discover that at least one Japanese professional baseball player took part in the attack - Eikichi Nagamochi.

Nogamochi was drafted into the Imperial Navy in 1939 at age 21.  He was stationed on the aircraft carrier Shokaku which was one of the six carriers used in the attack on Pearl Harbor.  It is unclear to me what his role on the carrier was - the Google Translation of his Japanese wikipedia page simply says he was "aboard" the carrier while his entry in Japan Baseball Daily (accessed via the Wayback Machine) implies that he was a flyer.  The Shokaku was sunk by a US submarine during the Battle Of The Philippine Sea in 1944 - Nagamochi was either onboard when it was sunk (Wikipedia) or his plane was shot down (Japan Baseball Daily) - either way, he spent two hours in the water before being rescued.  He suffered burns on his face due to oil in the water with him that apparently required hospitalization in Kure back in the home islands.

When professional baseball started up again after the war, he joined the Tokyo Senators, the team that is now the Hokkaido Nippon Ham Fighters.  He stayed with the team until 1950 (during which time the team changed its name to the Tokyu Flyers and then the Kyuei Flyers and then back to Tokyu) when he joined the Taiyo Whales.  In 1951 he joined the Hiroshima Carp and played for them seven seasons before retiring.  After his playing days were over he coached high school baseball - winning the Koshien tournament in 1968 with Omiya Industrial High School.  He passed away from a heart attack in 2000 at age 82.

I don't think there are any modern cards of Nagamochi.  I have a couple menko cards of him from the late 40's/early 50's (one of which is here) along with this 1947 JBR 36 bromide card of him: 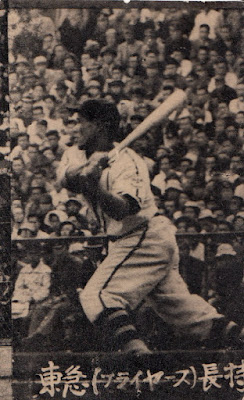 His face looks dark in this photo - I don't know if that's due to the burns he suffered during the war, if it's in shadow or even if it's simply a discoloration in the photo itself.
Posted by NPB Card Guy at 9:02 PM